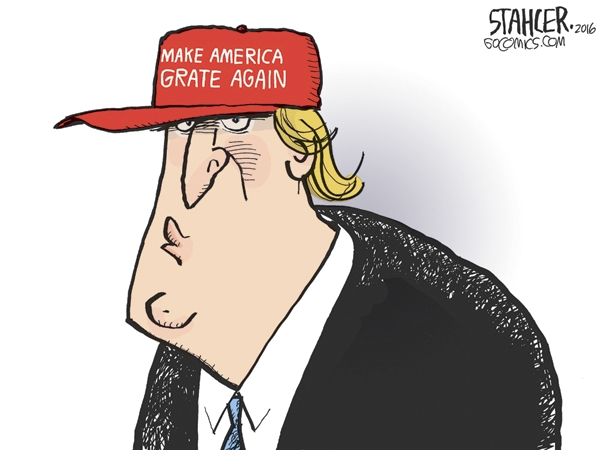 Since religious language has again infected this unpredictable and turbulent political season, here is a verse that could describe the followers of Donald Trump. It is found in Paul’s second letter to his protege Timothy (or as Trump might call it, Two Timothy): “For the time will come when people will not put up with sound doctrine. Instead, to suit their own desires, they will gather around them a great number of teachers to say what their itching ears want to hear.”

All politicians tell voters what they want to hear. It is one reason for the anger many voters feel for members of both political parties. These voters believe Washington has let them down, promising things it has not, or cannot, deliver in exchange for their support.

Trump makes grandiose promises and claims he never backs up with facts. The latest, as noted by Washington Post fact checker Glenn Kessler, is Trump’s claim that he will negotiate the price of drugs with pharmaceutical companies, saving $300 billion. That his facts are incorrect and he doesn’t say how he will pull this off is of no concern to his followers, who never appear to question anything he says.

Kessler writes, “Once again, we are confronted with a nonsense figure from the mouth of Donald Trump. He is either claiming to save four times the entire cost of the Medicare prescription drug system — or he is claiming to make prescription drugs free for every American. Neither is possible.” Kessler gives Trump “four Pinocchios,” his highest rating for not being truthful.

What about that border wall Trump continues to promise he will build across the southern border, sending Mexico the bill? It’s a great applause line, but in a recent interview on CNBC, former Mexican president Felipe Calderon said: “Mexican people, we are not going to pay any single cents for such a stupid wall.”

In the CNBC interview, Calderon noted that closing the southern border would likely harm the U.S. more than it helps: “We love American products.”

According to the Office of the U.S. Trade Representative, Mexico was the second-largest export market for the U.S. in 2013, totaling more than $226 billion.

To followers of Trump it doesn’t matter. Inaccuracies and the unlikelihood of making good on his promises are not as important as the thought behind them. This can be dangerous in a leader who aspires to power.

Writing in the Harvard Business Review in 2012, Tomas Chamorro-Premuzic, the CEO of Hogan Assessment Systems, a professor of Business Psychology at University College London and a faculty member at Columbia University, warns about “The Dark Side of Charisma.”

Noting “the short-term benefits of charisma are often neutralized by its long-term consequences,” Chamorro-Premuzic lists four reasons for resisting charisma: “Charisma often dilutes judgment,” it is “addictive,” it “disguises psychopaths” and it “fosters collective narcissism.”

Despite the dangers, he says, “the dark side of charm is often overlooked.” Before the rise of Trump, one could point to President Obama as a recent example of the phenomenon.

“In the era of multimedia politics, leadership is commonly downgraded to just another form of entertainment and charisma is indispensable for keeping the audience engaged,” notes Chamorro-Premuzic.

A characteristic of Trump’s followers appears to be their determination to ignore any evidence that would challenge their faith. And so when I question the reality show-style of Trump, I get messages on social media calling me a “sack of (excrement),” a member of the “establishment” and “old,” which is the unkindest cut of all. Remember when age used to go with wisdom, unless proven otherwise? If you’re a millennial reading this, perhaps you have no memory of such a time.

Trump may well win the Republican nomination and even the presidency. If he does, it will confirm that the transformation of American politics — from serious business, to another form of entertainment — is complete and the White House will become the biggest reality show of them all.