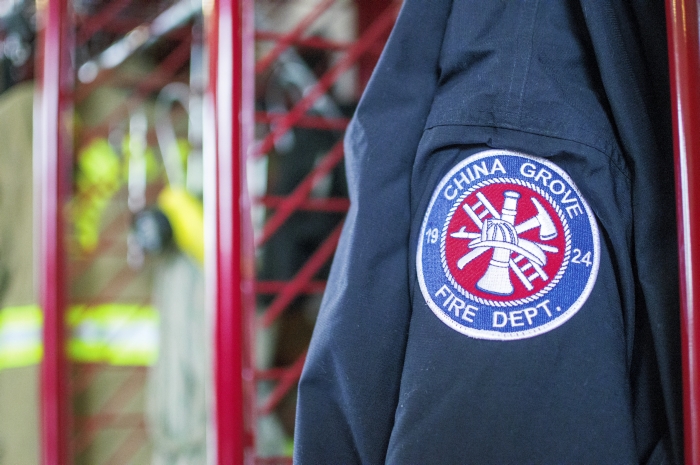 Josh Bergeron / Salisbury Post - A jacket hangs in a China Grove Fire Department locker. The department recently received notice of an improved ISO rating that applies to residents of China Grove and the surrounding district.

The town last week learned the fire department’s ISO rating had improved from a six to a four. Only three departments have an ISO rating better than China Grove, according to a list maintained by Rowan County Emergency Services. A number of departments have the same rating. The ISO rating scale goes from one to 10. One is the best. A rating of 10 means the department is not recognized as certified.

China Grove’s top two officials are crediting Zimmerman’s leadership as a reason for the improvement.

Zimmerman “is one of the most knowledgeable, dedicated, and professional fire chiefs I have ever had the pleasure of working with,” said China Grove Town Manager Ken Deal. “He has revived the town’s fire department to a level of professionalism the citizens deserve. He has brought a new standard of work ethics to the department.”

“We had some great employees, but didn’t have the leadership we needed,” Withers said. “Mike is that guy.”

“People just want to work for somebody like Mike,” Withers said. “People are proud to wear Station 43 again.”

“The citizens in the Town of China Grove should rest easy knowing they have a fine group of firefighters protecting them and their property in case of an emergency,” Goodwin said.

With an improved ISO rating, discussions now turn to the future of the China Grove Fire Department. Town officials have tossed around the idea of merging the fire department with Bostian Heights. Withers said China Grove could also hire a full-time chief. Deal said town officials in 2016 will also continue to discuss a possible merger.