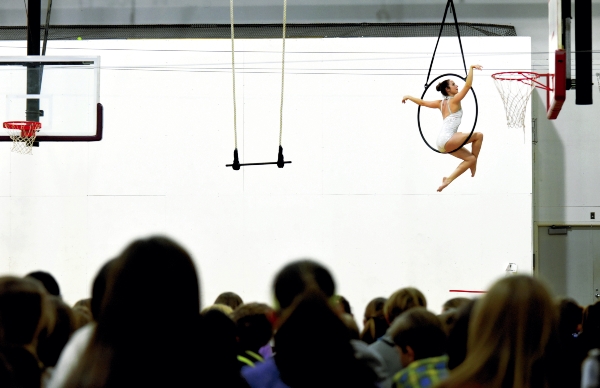 CONCORD — At Cannon School, kids crowd into the gym at, sitting cross-legged on the floor. There’s a palpable feeling of excitement in the air as they chatter and laugh, but when the music starts up, the kids go quiet, all eyes focused on the front of the gym.

It’s the start of “Artist Invasion,” a day dedicated to the arts, and when the two acrobats take to the air and twist on a trapeze above the gym, smiles break out in the crowd.

The day was the dream of the school’s three arts directors.

“They wanted this one day . . . where kids can be immersed with different types of art,” Marketing and Communications Manager Amy Reiss said.

Friday, 10 artists from the surrounding community were invited to attend, ranging from Opera Kitty, a group that introduces young children to opera, to Caroline Calouche and Company, who performed dance and feats of acrobatics in the school’s gym.

Director of Visual Art Melissa McDaniel said that not only does the invasion showcase the school’s vibrant arts program to parents and community members, it gives students positive role models. While the artists specialized in everything from pottery to A capella, they had one thing in common: they’d chosen art as their passion and career.

When Artist Invasion was in its early planning stages, McDaniel said, the arts directors weren’t sure if they wanted the event to consist entirely of performances or if they wanted it to have a more festive atmosphere.

“We kind of landed in the middle,” she said.

Each of Cannon’s 1,000 students were able to attend two events, in between regular classes. The performance or activity kids participated in was determined by the child’s school division or grade.

Younger kids had fun with Opera Kitty, a juggler and a balloon performer. Older students talked to a sculptor, learned the history of jazz with a jazz quartet, or were invited to create pottery. It was a rousing success.

“You could feel the positive creative energy, and that is exactly what we wanted.” McDaniels said in an e-mail.

In the school’s chorus room, eighth-graders packed in to hear Catawba’s pop A capella group sing hits – from a medley of songs by pop band Fun. to classics like Carly Simon’s “Let the River Run.”

In the elementary school division, students were invited to get crafting with the Scrap Exchange, a creative reuse organization based in Durham. The Scrap Exchange collects industrial waste – old camera film, foam trays, colored Styrofoam – and brings it to schools and festivals in barrels and boxes for kids to build, imagine and play.

“The kids get to use all the materials . . . it’s basically up to the child’s imagination,” Cannon School art teacher Krista Johns said.

While it was hard to live up to the knife-juggler they’d seen earlier in the day, the group agreed that they enjoyed the cut-and-paste landscape the Scrap Exchange offered best of all.

“I think my favorite thing today was to come into this art room and seeing all these things and being able to make whatever I want,” Madison Bryan said.

The invasion was based off Arts Jam, an after-school arts festival Cannon School had in previous years. However, Arts Jam was expensive to host, limiting the school to a biannual schedule, and many students had conflicts and weren’t able to attend. But the arts directors at Cannon believed that every student should have the opportunity to experience art, up close and personal.

“Doing this and integrating it into the school day allowed all of us to touch all of the students,” McDaniel said

So the invasion was born, and at a total cost of about $4,000, it’s a much cheaper option and would enable to school to host it every year. And with the success of the first artist invasion still fresh and bright, McDaniel said she hopes it will become a school tradition.

“We couldn’t have asked for it to go any better than it did,” she said.