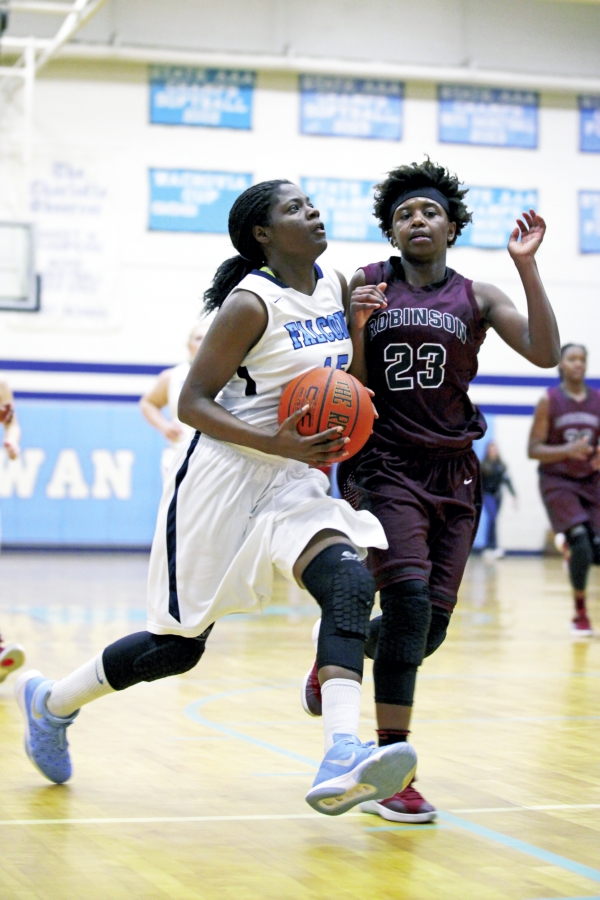 James Sipes/for the Salisbury Post ... West Rowan’s Khaila Hall moves toward the basket during last night’s first round state playoff game against Robinson. The Bulldogs’ Jada McMillan (23) defends. Hall had a triple-double in West’s victory with 10 points, 15 rebounds and 11 assists.

MOUNT ULLA — Robinson’s upbeat young girls basketball coach Justin Thomas aged about 20 years in the first quarter.
Getting hit by a white and blue freight train will do that to you.
“Sometimes there’s just not a lot you can do,” a head-shaking Thomas said.
West Rowan got a dominating triple-double from senior Khaila Hall, played its best game all season and crushed Robinson, 67-22, on Tuesday in the first round of the 3A state playoffs.
This was the same Robinson team that lost, 55-51, to the Falcons in the same gym in a South Piedmont Conference encounter on Feb. 4.
“Last time we played their game, and this time we played ours,” West senior Shanice Miller said. “We went out there and played fundamental basketball.”
With Hall racking up 10 points, 11 assists and 15 rebounds, fourth-seeded West (26-2) won its 18th straight game and tied the school record for victories. West won a playoff game for the first time since 2011.
As far as X’s and O’s, the Falcons made two adjustments after watching film of their 55-51 struggle with Robinson.
“We did a lot of standing around in that last game, and this time we did a much better of of staying on the attack,” West coach Ashley Poole said. “And our defense was just phenomenal. We stayed in front of (freshman guard Jada) McMillan. We made her take jump shots.”
Coaches can always find something to fuss about even after a win. Poole tried, but failed.
“No complaints about this one,” she said. “None at all.”
Hall set the tone early, whipping passes to Miller and Egypt Alexander, who poured in 23 points, for routine layups.
Then Taylor Martin got involved with a steal for a three-point play and a 3-pointer. Suddenly, the Falcons led 12-2.
When West ended the quarter with another Miller layup and a driving bucket by Hall, it was 21-4, and it was just about over.
“They were clicking on all cylinders, and you saw the No. 1 team in our league playing a great game,” Thomas said. “We missed some layups that hurt us, and they were doing everything right. West played smart, they played together, and they played really hard.”
Alexander, a lefty scoring machine, got four more buckets in the second quarter, and West took a 38-8 lead to the halftime break.
“We kind of had that burst of energy that we’ve been looking for,” Hall said. “It’s playoff time, and everyone wanted to play at their full potential. We wanted to finally put one away early — and we did.”
Robinson (9-15) never found the range offensively, and those Bulldog misses were being grabbed by Miller, Alexander and a soaring Hall.
Martin, who scored 13, had a burst of seven quick points early in the third quarter. By the end of that period, it was 53-18.
When Miller stepped out to knock down a 3-pointer with 5:21 left in the game, the Falcons led 60-20, a 40-point bulge that brought on a running clock the rest of the way.
Hall, the South Piedmont Conference Player of the Year, sat down, seemingly for good, with double figures in rebounds and assists, but Poole inserted her back in the game late so she could get the two layups she needed for a rare triple-double.
“That’s something I’ve wanted to do all year, and it was great to finally do it in a playoff game,” Hall said.
The Falcons got points off the bench with Alex Linder making a 3-pointer and Kia Pharr putting in three layups. Peyton Greene banked in a free throw and a set shot late in the contest.
“They had a lot going for them tonight, and they had a good crowd behind them for a Tuesday girls game,” Thomas said. “They’re well-supported and a team that good has earned that support.”
West will host Ledford (18-8) on Thursday at 6:30 p.m. Ledford beat St. Stephens 69-51.