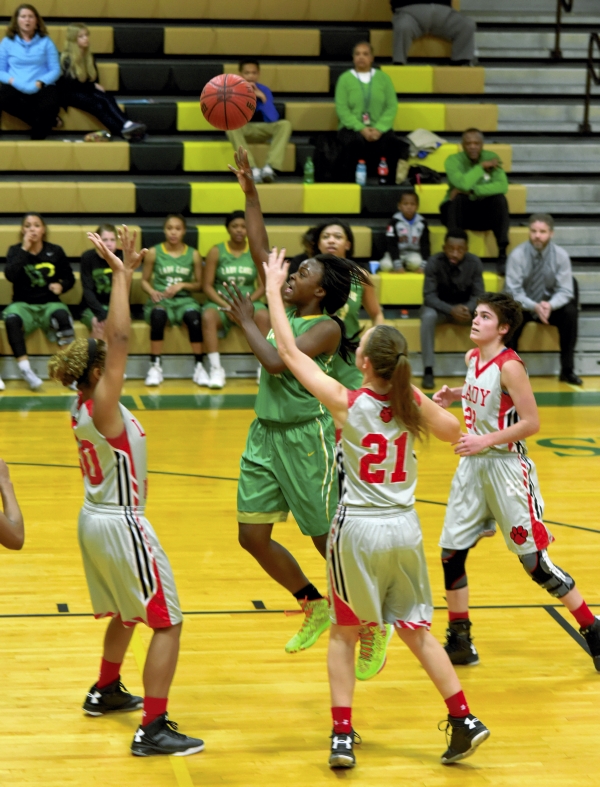 JON C. LAKEY / SALISBURY POST ... North Rowan’s Special Washington (10) floats a running one-hander toward the rim for the winning basket with seven seconds left in the game. The Cavaliers defeated Franklin, 50-48, in last night’s first round playoff game in Spencer.

SPENCER — This isn’t the story the North Rowan girls basketball team wanted to tell, but it ends the same way.

The Lady Cavs thought they could wheel out the dessert cart and help themselves to a cream-filled victory against visiting Franklin in Tuesday’s 2A state playoff opener. Instead, it took a spectacular driving floater by Special Washington with eight seconds to play for North to survive, 50-48.

“She made a great, great shot,” coach Brian Lytton said after 12th-seeded North (18-7) advanced to Thursday’s second round. “She saved our season.”

Washington scored seven of her team-high 12 points in the final period, a misadventure that saw North mount a 44-28 lead with 6:50 remaining. With a chance to turn this cordial sit-down into an all-you-can-eat buffet, the Cavs unspooled and watched the No. 21 Panthers reel off 16 unanswered points and knot the score on a layup by Lexi Taro with 2:34 to go.

“We gave them a run,” losing coach Scott Hartbarger said, after Franklin finished 14-11. “Our defensive pressure got to them in the fourth quarter. It got us a lot of extra possessions and easy looks at the basket.”

“Throwing passes to someone who’s covered instead of to someone open,” he said. “Not taking our time and throwing a good, hard, solid pass. Just kind of floating the ball toward anyone in a green jersey. Not playing heads up basketball.”

It wasn’t like that in the third quarter. Franklin did not make a field goal and was held to one point. North, meanwhile, got a lovely fake, duck and drive layup down the lane by senior Tre Allen to build a 35-28 lead midway through the period.

The lead expanded to 41-28 when Tajah Oglesby connected on a short set shot from inside the lane early in the fourth quarter. Then Washington hit a free throw following a technical foul against Hartbarger — and followed it by sinking both ends of a one-and-one for a 16-point NR edge.

“We had a defensive scheme that was working really well,” Lytton said. “And we were supposed to continue with that scheme, but we stopped doing it. I don’t know why.”

That opened the cage door for the Panthers, who received seven consecutive points from Taro, a junior guard. The visitors pulled even and had a chance to take their first lead since jumping to a 9-3 lead in the opening three minutes, but Taro misfired on a free throw. North responded with consecutive layups by Washington and Brianna White for a 48-44 advantage.

“Some of us were getting anxious to score points,” Allen said. “And some of us wanted to slow down. We weren’t on the same page in the end and may have panicked.”

Franklin’s final charge up the hill was fueled by senior guard Tory Agrusa, who made two free throws with 42.7 seconds and then stole a pass near midcourt with 35 seconds to go.

“I anticipated where the girl’s eyes were going,” Agrusa said. “Once she threw it in I knew right where to go.”

Agrusa was fouled and tied the score with two free throws with 25.5 seconds to play. That’s when North coated this victory with “Special” sauce — and Washington sent the crowd home happy.

“I had a good feeling,” Washington said. “Coach (Lytton) told me to drive and find the best shot. I saw an open layup and got it.”

Franklin had a final chance to tie or win, but Agrusa’s 3-point attempt at the buzzer never found the rim as Aliyah Farmer contested her with great defense.

“A win’s a win,” Lytton concluded. “The season goes on. But we will have to play better.”

NOTES: North will travel to North Wilkes (26-2) for Thursday’s 7 p.m. second-round match. The fifth-seeded Vikings advanced with a 43-22 opening-round win over Ashe County.