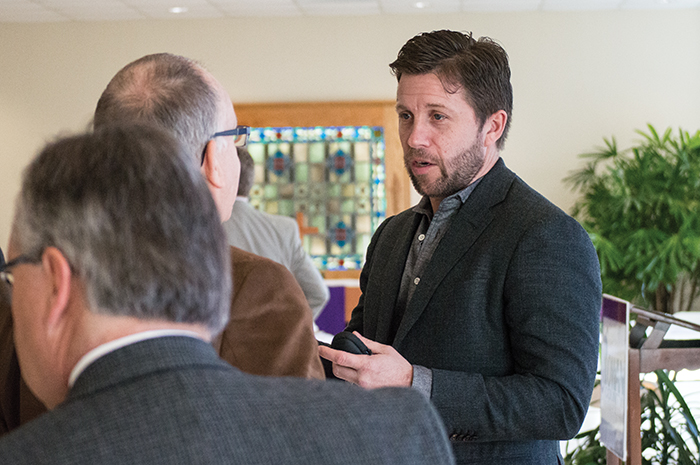 Steve Chandler, who has been hired to oversee Rowan's rebranding, speaks to Chamber of Commerce members. Josh Bergeron / Salisbury Post

At a Chamber of Commerce breakfast last week, brand strategist Steve Chandler asked the crowd to describe Rowan, in a word.

Historic, one person said. Friendly, said another. Beautiful. Barbecue. Farming. And so on.

“None of you mentioned ‘logo,’” Chandler quipped.

The exercise was an illustration of what a branding campaign is not. Branding is not a logo or a motto. “It’s about an experience,” Chandler said. What are the things you can enjoy in Rowan County? People just about everywhere say their community is a great place to live. What’s unique about Rowan?

Considering the evolving and multi-faceted nature of Rowan and its towns, it’s not too surprising that Chandler’s work is taking more time than expected. His Tennessee-based company, ChandlerThinks, has been working with the Salisbury-Rowan Convention & Visitors Bureau on the project for about five months. When his appearance at the breakfast was scheduled, organizers hoped he’d be ready to unveil Rowan’s branding campaign.

“We’re not there yet,” he said up front.

But his talk last week could be considered an introduction to the final product, a primer on the breadth and depth of a true branding campaign. Chandler defined it as the purposeful orchestration of a place to positively affect its mindset and build its reputation by exploiting and crafting shared experiences that are attractive to residents, businesses and visitors alike.

To put it more simply, what are the features and experiences  that, properly highlighted, could make most Rowan residents  proud and impress visitors? What might draw people in? What kind of community do we aspire to be?

To help answer those questions, Chandler’s firm is collecting responses to a community perception survey. If you haven’t done so yet, you can take the survey online at https://www.surveymonkey.com/r/RowanCountyCommunitySvy. Submissions are anonymous and no personal information is asked.

In other communities, Chandler said, he typically gets 350 to 400 responses. As of last week, Rowan people had submitted 1,300 responses. “That says something,” Chandler said. What, exactly, he didn’t say.  Maybe it’s that we have lots of opinions. True enough. What’s better, lots of us want to be involved in shaping Rowan County’s image and future. That’s a good thing.