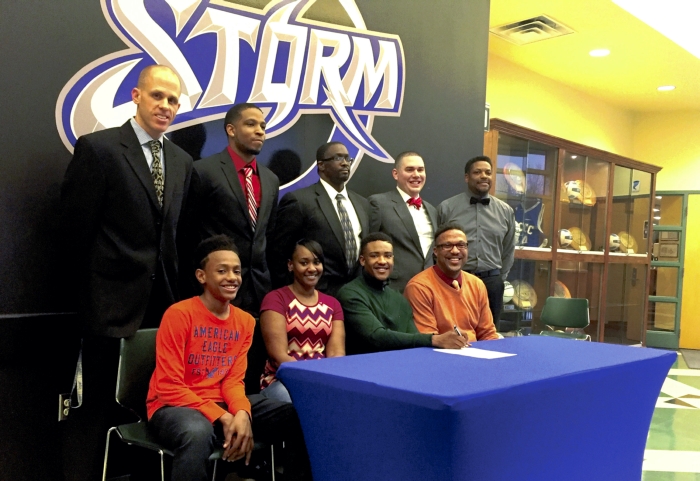 LEXINGTON — Tre Williams is the No. 2 all-time scorer at Carson High School, but Davidson County Community College basketball coach Matt Ridge wasn’t overwhelmed when he made the short trip to China Grove to watch the 5-foot-11 guard play as a senior.
“I honestly didn’t realize how good he was,” Ridge said. “I don’t think he’s someone you can really appreciate when you only see him play once or twice. When we brought him to DCCC, all we gave him was a chance to compete for a jersey and a spot on the team.”
The rest is history. Now a sophomore, Williams has become the best all-round player and vocal leader for a talented 27-3 squad that will send a half-dozen players to four-year schools.
Williams out-works and out-thinks opponents. He averages 15.4 points, 7.1 rebounds and 5.4 assists. He was voted all-region and was runner-up for region player of the year. He’s one of only two Region X players nominated for All-America honors.
Williams was very good for the DCCC Storm as a freshman. As a sophomore, he’s been dynamite, and his college career will continue. Surrounded by family, teammates and coaches, he signed on Monday at DCCC’s Brinkley Gym with Claflin University in Orangeburg, S.C.
Claflin is a Division II school that competes with other HBCU schools such as Tuskegee, Stillman, Morehouse and Albany State in the Southern Intercollegiate Athletic Conference.
“I didn’t want my parents to have pay for school, so one of my main goals was to get a scholarship,” Williams said. “Coach (Jonathan) Charles, one of Claflin’s assistants, came and saw me play against Sandhills and I had a good night with 24 points and eight rebounds. He told me after that game that he’d fallen in love with my game.”
The perception is that community college basketball is all about individuals trying to put up numbers to attract the attention of four-year schools, but Williams has managed to stand out while still maintaining a team-first approach. The Storm is 54-6 in Williams’ two seasons.
Ridge says he figured out a few weeks into Williams’ freshman season that the Storm was always going to be better with Williams playing than with Williams watching.
“He’s been the backbone of our program, and without question, his leadership has made all of his teammates better,” Ridge said. “He holds himself to a high standard of excellence and he demands the same from his teammates. He’s led by example and he’s led us verbally.”
Williams’ DCCC teammate David Tripp, a former A.L. Brown player, says he wants Williams to be the best man at his wedding someday. That’s how much influence Williams has had on him.
“When I first came to school here it was rough,” Tripp said. “It’s ironic because we played against each other in high school, but Tre is the guy who helped me work through things here. If I want to stay for extra shooting, Tre stays and works with me. He’s been a great teammate.”
Fans who saw Williams play for coach Brian Perry at Carson two years ago wouldn’t recognize him now. He has a new, svelte shape. Williams carried a thick football body in high school, understandable because he was a fine football “spur” as well a state-level thrower in track and field. Now he looks like a more traditional basketball player, lean and hard. Besides shedding about 20 pounds, he’s added muscle.
Williams shares the school record at Carson with Nick Houston for most points in a game (37), and he finished his prep career with 1,265 points. Only Darius Moose scored more for Carson.
Williams has taken that scoring ability to DCCC, although what he does best is rebound. Even at 5-11 and playing on a team with some trees, Williams leads the Storm in boards. Rebounding is mostly will, and Williams has enough will for five people.
“I love winning and I hate losing, and you do whatever it takes to win the game,” Williams said. “Rebounding decides a lot of games.”
Williams hurt his knee in October and missed a month of activity. He says that idle month reinforced his love for basketball. He missed it even more than he thought he would and the down time fueled his desire to get a scholarship to he could compete for two more years at the college level.
“I give credit to my teammates and coaches, especially Coach Ridge,” Williams said. “He knows how to get the best out of me every day in practice. That’s made me a better player in the games.”
The Storm lost a tough game Sunday to Caldwell Community College and Technical Institute in the Region X tournament championship game despite 18 points and nine rebounds by Williams.
Next for the Storm is the District VII tournament this weekend at CCC&TI’s campus in Hudson, and the Storm still has a chance to advance to the national tournament in New York.
The best news for Williams is this season won’t be the end of his basketball journey.
“Claflin is getting a big-time player and a great person,” Ridge said. “They’re getting a winner.”