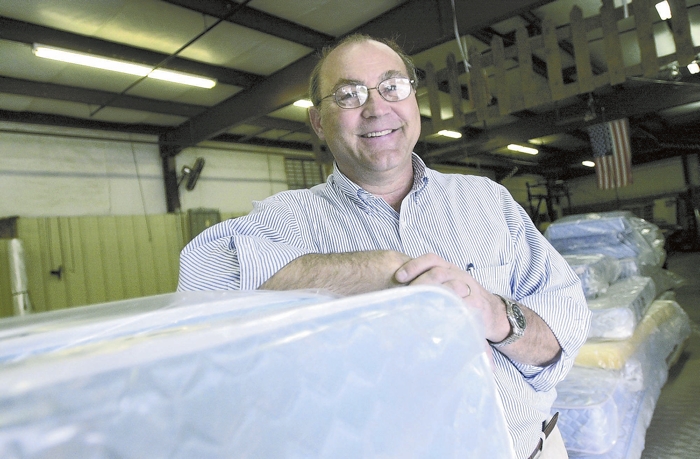 John Heilig has made custom mattresses of all shapes and specifications.

He has made one with a corner cut off to fit in a camper, and one with a concave space for a footboard. He has built in extra reinforcement for special needs children who rock in the center of the bed.

Heilig even picked up an ancient mattress one morning, renovated it and returned it the same day so the man of the house would not know anything had changed. He just had to be sure to leave a hole exactly where there had been one before.

As Heilig closes the Taylor Mattress Co. that has been in his family for a century, he remembers the satisfaction he got from making mattresses himself as a one-man operation.

“That really was the best part of my career,” he says.

Heilig took pride in the quality of his mattresses. He knew many of his customers and saw them around town. “I’d rather wave and smile than have to duck.”

G.A. Taylor started Taylor Mattress in 1903 and incorporated it in 1905. Heilig’s grandfather, James D. Heilig, a stockholder and board member, bought the business after Taylor died in 1916.

He kept the Taylor Mattress name because the company had such a good reputation, his grandson says. Taylor workers took pride in their products. The company was known for going the extra mile and giving customers more for their money — values that stuck.

One of the company’s early structures was built on a hillside; farmers could drop off hay at one window and corn shucks at another. Workers stuffed mattresses with the materials and sewed them together with 18-inch double-pointed needles, Heilig says.

Later farmers would bring in their cotton on Saturdays so the Taylor workers could help them make their own mattresses, he says.

Manufacturing continued in Salisbury through 2000. For about 15 years, Heilig handled all aspects of the business.

He made mattresses shorter, longer, thicker, thinner, harder, softer — whatever his customers requested.

He supplied mattresses for 98 of the state’s 100 county jails, he says. And making 600 mattresses for Methodist work crews cleaning up after Hurricane Andrew just about did him in.

But that kind of work takes its toll on a body. For Heilig, the trouble started with tendonitis in his elbows. Now 66 years old, he recently had his 12th orthopedic surgery.

Even after he stopped building mattresses himself, he found a small manufacturer in High Point that could take his orders and use his specifications. “It’s still my Taylor Mattress,” he says.

Now, he says, he’s ready close up shop. “I think the time is right.” He plans to hold an auction of equipment and supplies on March 6, and then lease or sell his building.

But he has good memories, some as recent as the postings on the company’s Facebook page.

The company had a loyal following. One couple came in to order a specialty mattress before they moved away; they were afraid they wouldn’t be able to find anything as good in their new town.

Heilig tells of a couple with special needs who came in to buy a mattress but never asked about the price. “Finally I asked them, ‘Don’t you need to know the price?’ They said, ‘Oh no, we have had a Taylor Mattress before and we were never so satisfied with a mattress.'”

In 1999, the Post took a photo of Heilig working on a mattress that was 8 feet long; a regular queen size is 6 feet, 8 inches long. He made it for a Greenville, Ala., customer who said her son was very tall and still growing. “This is about the oddest-size bed I’ve ever made,” Heilig said at the time.

That kind of service is rare in these days of mass production. “It’s hard to find anybody who wants to make one of anything,” Heilig says.

He even made furniture for a pot-bellied pig — a little snap-together sofa — so a customer could take the pig along on a beach vacation.

Heilig says many Christmases he’d hear from someone who slept on a Taylor mattress while visiting in Salisbury and wanted to take one home — to Texas, Oklahoma and even Irvine, Calif.

“The thing about this product is, the quality is so hidden,” Heilig says. “People don’t appreciate the value until they finish with it.” Then they can’t find a good replacement.

He doesn’t buy the idea that mattresses need to be replaced every seven or eight years, as some manufacturers say.

Heilig says Taylor mattresses were well-insulated, with a protective layer between the coils and the cushioning, using a dense, high-quality foam. The user would not end up with a body impression in the mattress — something that happens all too often and quickly with today’s mass-produced mattresses.

“I can’t say there’s any magic ingredient or special dash of oregano,” Heilig says. “We used better materials, and we could afford not to cut corners.”

John Heilig has scheduled an auction at Taylor Mattress, 1029 S. Main St., on March 6 to clear out the woodworking tools, antique furniture, dollies, carts and other equipment he still has on hand.