Levi and Dorothy: A connection held together by ‘keepsakes’ she left behind 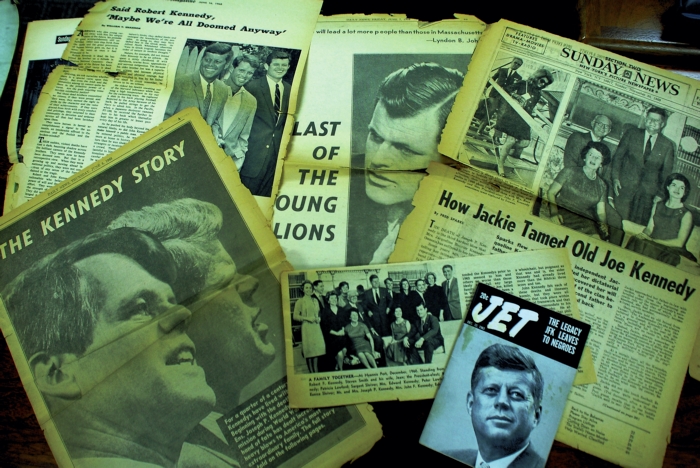 The late Dorothy Frye of Brooklyn, N.Y., had a fascination with the Kennedys and saved every story she could on the family. Levi Adams of Salisbury ended up with the many articles she saved. Mark Wineka/Salisbury Post

SALISBURY — Levi Adams didn’t know Dorothy Frye all that well. How could he? She had spent her life in Brooklyn, N.Y., while Adams was a Southern man through and through.

So it’s just the way things go in life sometimes that through family circumstances, Adams wound up with the late Brooklyn woman’s more cherished keepsakes.

But the things Frye treasured were the many clippings she cut out of newspapers or the magazines and show programs she saved. Frye had a special fascination with Dr. Martin Luther King Jr.’s life and death, and the same could be said of the Kennedys, especially John F. and Bobby.

Today, Adams can’t help but linger over these stories and pictures himself.

There’s more, actually. Frye loved the old-time movie stars such as Clark Gable, Gary Cooper and Hattie McDaniel, and she kept entire books of just their photographs. She also squirreled away specially printed show books on Broadway musicals such as Ginger Rogers in “Hello, Dolly!” and Sammy Davis Jr. in “Golden Boy.”

Frye loved anything to do with singer/actress Lena Horne, and Adams also ended up with Frye’s sizable record collection, featuring big band performers such as Artie Shaw.

“You would have thought she was a white lady,” Adams says of some of Frye’s musical tastes.

Not many people would hold onto the cardboard tops to small ice cream containers. But Frye did because the underside of those Breyers peel-back tops had medallion photographs of movie stars.

She affixed them to the pages of a notebook, which held other pictures she cut out of famous people.

So how are Adams and Frye connected?

Back in 2009, Adams’ wife, Deborah, became legal guardian of Dorothy Frye, who was 93 and living in a Jewish nursing home in Brooklyn. The women were cousins, and Deborah took on the responsibility of looking after Dorothy, but it meant moving her to Salisbury and a nursing home here.

Deborah Adams was originally from Brooklyn but had moved to Cleveland (N.C.) a long time prior to becoming her cousin’s guardian — “a process you would not believe,” Levi says.

Dorothy Frye did not leave the nursing home in Brooklyn quietly. Levi Adams says she was “very feisty” and spunky and she fought leaving the whole time. The day they were supposed to leave for North Carolina, Levi, Deborah and Dorothy missed their flight out of New York because of the fuss Dorothy was making.

Before moving to the nursing home, Frye had lived in the projects in Brooklyn, and Levi and Deborah rented a U-Haul to move some of her things out of Dorothy’s apartment. That’s when they found all the “keepsakes.”

“We were amazed when we saw it,” Adams says.

The couple managed to move Dorothy to Salisbury. Her mental awareness wavered at times, and Frye eventually thought she was still in Brooklyn, Adams remembers. But once, one of the nursing home staff members made the mistake of telling her she was in North Carolina.

“When she realized she wasn’t in Brooklyn,” Adams says, “she tore that place up.”

It was only six months before Dorothy died in 2009. That same Thanksgiving, Deborah Adams found out she had pancreatic cancer, and she died in December 2010, leaving all of Dorothy’s stuff from Brooklyn with Levi.

Adams opens up a satchel and takes out story after story of Dr. Martin Luther King Jr. Dorothy kept, for example, the 32-page commemorative edition on King by the New York Daily News. It appeared on the 30th anniversary in 1998 of King’s assassination.

There’s also a specially printed Award Book, which sold for $1 and was titled, “Martin Luther King Jr.: The Journey of a Martyr.”

Dorothy saved a publication telling the story of the Southern Christian Leadership Conference in words and pictures. And she has a Jet magazine booklet, “King’s Legacy: Love,” which sold right after King’s death for 25 cents.

Jet put out a similar 20-cent booklet on President Kennedy and his legacy connected to blacks after the president’s assassination in 1963.

“She’s got a lot of Kennedy stuff, too,” Adams says.

Adams wants to do something with Dorothy’s stuff. If any of her things are worth anything, he says he might sell them. But he also thinks they belong in a library or museum, so that could be an option.

“She had a bunch of stuff, wow,” Adams says.

Black History Month: a mix of photographs from the…