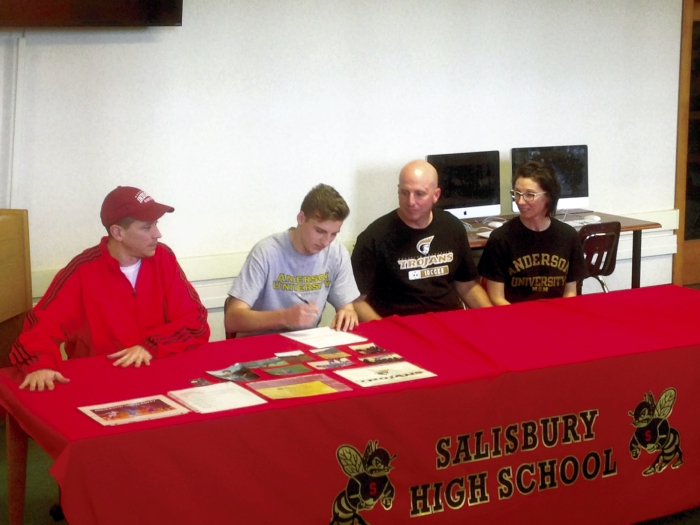 SALISBURY — Listening to Salisbury soccer player Landon Goodman’s story is like reading a comic book.
Goodman surged from mild-mannered backup to All-State superhero forward and college prospect in a matter of two seasons.
“In my 15 years at Salisbury, the biggest transformation I’ve seen,” Salisbury coach Matt Parrish said. “It’s not that Landon started that low, but when you consider the whole spectrum, where he was a few years ago, where he is now, well … it’s just remarkable.”
Goodman signed with Division II South Atlantic Conference school Anderson on Thursday with family, friends and teammates looking on. That signing capped a fairy-tale year that has included 66 goals, a state championship (27-0-2) and a roster spot in this summer’s East-West All-Star Game.
Goodman’s secret formula wasn’t radioactive spiders, super serums or gamma rays — it was simply work and more work. While Goodman seemed to blossom into a superstar overnight as a junior, that’s just how it seemed. Behind the scenes, he’d put in long hours.
“Landon made himself a player,” teammate Joshua Lynch said. “He’d put in a lot of work not just during the soccer season but every offseason.”
Goodman said Salisbury’s win in the 2013 state championship game was a turning point for him.
“I was fortunate to play in that game when I was a sophomore, and it was a great learning experience,” Goodman said. “I was a backup to great players like Bobby Cardelle and Emmy Turcios, and I wanted to be like those guys. Then when my junior year started, I got the opportunity. I had something to prove, and I did what I’d always wanted to do. I started scoring goals.”
He scored 39 goals as a junior after beginning the season as an unknown. That was 31 more than he’d scored in his previous two seasons.
“He’s a perfect soccer wrecking ball,” Parrish said. “Just a great combination of size, speed, guts and acumen (the ability to think clearly under pressure). He not only had the physical ability to get to the spot he needed to get to, he had the guts and the acumen to make big shots. Some guys can get to the spot. But not all of them can score the tough goal.”
That breakout junior senior was a stepping stone to Goodman’s sensational Rowan County Player of the Year senior season. His 66 goals are tied for third on the state’s all-time list for a season.
Even after Goodman became a big scorer, he stayed hungry. He tried to win every drill in practice. Parrish never saw his motor stop running. That’s why he was so well-prepared when scoring opportunities presented themselves in games.
The third-round struggle with CATA that Salisbury won 3-2 on an overtime goal by Goodman and the 3-0 state-championship win against Washington in his last SHS game will be lifetime memories.
“CATA was the toughest match we had and Landon decided it with a tremendous goal,” Parrish said. “He didn’t get the winning goal in the state championship, but he got the dagger, the second goal. He got that goal against a very solid defender whose only job that day was to stop Landon Goodman.”
Goodman’s teammates appreciated how he carried himself as much as they did his frequent goals.
“He was like having another coach on the field, just a great leader,” Lynch said. “He did a lot to help our younger guys. If they were nervous, he helped them get over it.”
Goodman had a tough decision to make as far as college. He had an offer from Division I Presbyterian, but he chose Anderson for several reasons.
“The town is a lot like Salisbury and it just felt like a good environment to go to school in,” Goodman said. “I’m not saying that I’ll go down there and start right away, but I will have the opportunity to compete for playing time as a freshman.”
Parrish is thrilled with the choice, and not just because he’ll get to see him play a few times against Catawba.
“There’s a right place for everyone, but you go to a D-I school and that’s about an automatic redshirt and then you might not play for two more years,” Parrish said. “Landon is a competitor and he wants a chance to compete right away. Anderson is a perfect fit for him, athletically and scholastically.”
Anderson was 8-8-1 last fall and 7-4 in the SAC.
Anderson coach Michael Zion has announced four recruits. College soccer has an international flavor. Goodman and a midfielder from Georgia will be joined by newcomers from Japan and Sweden.
“Anderson is getting a good one,” Parrish said. “Every time we put a game on Landon’s foot, he delivered.”