One injured in head-on collision 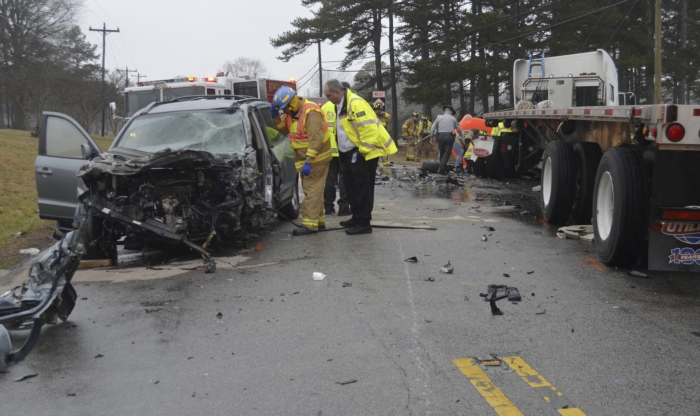 The N.C. Highway Patrol is investigating this crash where officials said this Hyundai sport utility vehicle passed a rollback, not shown, on N.C. 153 and collided head-on with the tractor trailer, right. The driver of the SUV was pinned inside until firefighters were able to free them. The crash occurred at the intersection of Cannon Farm and Mount Moriah Church roads, near Landis. Shavonne Walker/Salisbury Post

One person was injured Monday following a collision in which a sport utility vehicle and a tractor-trailer hit head-on, pinning in the driver.

The N.C. Highway Patrol is investigating the collision that tied up N.C. 153 as well as Cannon Farm and Mount Moriah Church roads late into the evening. The crash occurred just after 3 p.m. The driver of the SUV, whose name was not immediately available, was seriously injured and taken to Carolinas Medical Center-NorthEast in Concord.

Atwell and Landis fire departments worked to get the driver free of the SUV by using the Jaws-of-Life, said Lt. Spencer Basinger.

Basinger said it took rescuers about 30 minutes to free the driver.

In addition to freeing the driver, firefighters also placed down Oil Dri — a paper towel-like pad used to absorb the diesel spill from the tractor-trailer. Employees with Landis Public Works also used a skid steer to load sand onto the fuel that leaked onto nearby Pethel Road.

No other names were immediately available.