Waterworks exhibitions: From bugs to bottles and more 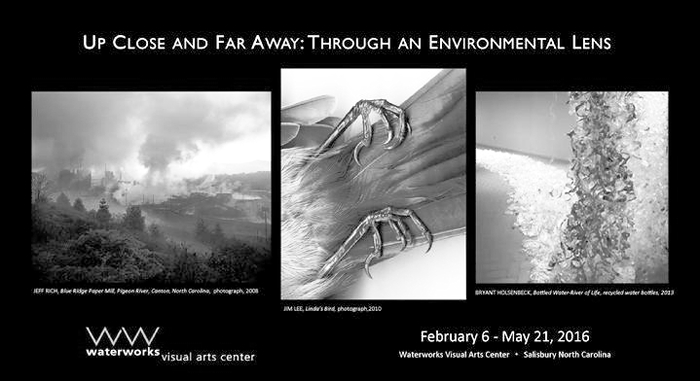 ‘Through an Environmental Lens’ will be at Waterworks through May 21

The exhibits that inhabit the floors and walls at the Waterworks Visual Arts Center throughout the year vary in subject and theme and some are downright strange. But that is what makes them fascinating and different. Currently, there are three imaginative exhibitions under the general theme of “Up Close and Far Away: Through an Environmental Lens.”

For example, take a look at what is on show now — a chilling display of beetle carcasses, cleverly and artfully scanned and photographed in color, the images arranged with an appreciation for size, proportion, their natural look and the scientific aspects of their role in nature and how they survive, as well as how they die and decay. It is the work of artist Jim Lee of Durham, who says in a statement of his art that he “spends countless hours alone outdoors enjoying encounters with whatever presents itself.”

His photography is precise and careful.

“Photography is the most intimate thing” that he does, stressing his view of the natural world with all its complexity and strangeness. He remarks that his art is the story of the remains of life and that they are fundamental to life. Lee says that his observation of the decaying process lasted several weeks

Also taking up large amounts of wall space at the gallery these days is a collection of large format photographs by Jeff Rich of the University of Iowa centered around the rivers of the Tennessee Valley Authority and the Blue Ridge, with a view to how American industry has positioned itself on the banks of these rivers—the Oconee, Pigeon, Tennessee and others. The overall theme of the exhibition is how pollution and industry have combined to change the landscape of middle America, leaving it scarred and, at the same time, turned it into a series of vistas that are breathtakingly striking.

Rich has made these huge renderings over a period of 15 years, all under the theme of “Watershed: The Tennessee River” which is his ongoing project. His work examines the “complicated effects and consequences of large-scale modernization,” he writes, in the Tennessee River Watershed. His photography dramatically illustrates the results of life in that part of our world between the land, water, and man within the Mississippi River Basin and its thousands of square miles.

This exhibition is an illustration of what has taken place over the years with the installation of dams (large and small) the creation of reservoirs, and the introduction of massive industry has used and continues to use huge amounts of water. It also examines how all of the manipulation of rivers and dam construction has affected the livelihood of various species and their habitat in one of the most bio-diverse regions of the world.

The third exhibition at the Waterworks is one of the most innovative in the Gallery’s history of artists using everyday items as the ingredients and subjects of their art. Bryant Holsenbeck of Durham has seen the possibilities of illustrating her artistic visions through the use of plastic water bottles fastened together as a waterfall. Her creative work has been shown in Odessa, Texas, at the High Point Public Library, and has charmed hundreds of school children on tours of the exhibition.

Diversity and variety are constants at the Waterworks where creativity is always on display—free of charge. Gallery hours are 10 a.m. to 5 p.m. Monday through Friday; Saturday, 10 a.m. to 2 p.m. The exhibitions will be open to the public through May 21 at the nationally accredited visual arts center.