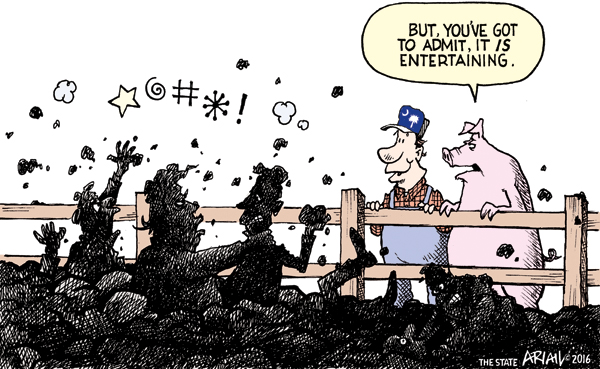 From Gary Pearce, on the Talking About Politics blog:

Today’s blog is written by my brother, Florida Man Fred:

The Pope insinuated that Donald Trump might not be a real Christian.

Donald Trump issues a cease and desist letter, calls the Pope an idiot who is worthy of impeachment, and threatens to build a wall around the Vatican.

Ted Cruz states that he was thrilled that the Pope has endorsed his campaign and is excited to learn that the Pope plans to register to vote in Florida just so he can cast a ballot for Cruz.

Jeb Bush tweets a picture of his rosary beads and a cross with the caption “America.”

Ben Carson states that the Pope is not to be trusted. No one can claim to be a Christian when he refuses to speak the language of Christ, English.  Besides, Carson once used a shiv to stab the Pope during a youthful indiscretion, which is why the Pope only has one lung. But the Pope has since forgiven him and don’t ask him about it because he will pretend it did not happen, but believe me, it did.  Because he said so.  Why would anyone question that?

John Kasich says something extremely intelligent and incredibly insightful. But he is sooo boring, no Republican voters notice.