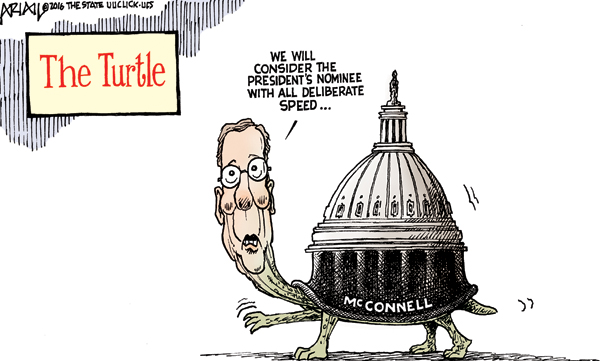 Supreme Court Justice Antonin Scalia’s body was barely cold last weekend when Senate Majority Leader Mitch McConnell, of Kentucky, drew a line in the sand: President Barack Obama, he said, should refrain from appointing Scalia’s successor and the Senate should wait until “the American people have spoken by electing a new president.”

Obama, who has nearly a year left in office, said he would fulfill his constitutional duty and make an appointment.

Who is right? Can common ground be found? Joel Mathis and Ben Boychuk, the RedBlueAmerica columnists, debate the issue.

It’s not that Republicans believe Democrats are simply wrong, or misguided, or even evil. It’s that they believe the Constitution, if strictly applied, would render many progressive policy ideas out of bounds and off limits, at the federal level at least. The federal government should pay for armies and roads and print money, perhaps, but most other ideas are simply unconstitutional.

Democrats, you may have noticed, have a number of “other ideas.”

The increasing refusal of Republicans to grant Democrats legitimacy has been on ample display the last seven years. The persistence of the “birther” lie in the GOP — the idea that Obama isn’t a real American and is thus an usurper in the White House — has been outstanding: Its chief progenitor is the party’s presidential front-runner!

Trump’s success shows things have gotten progressively worse since Sen. McConnell’s 2009 declaration that the Republican Party would simply refuse to cooperate with Obama on any policy matter, ever.

So it’s not shocking that McConnell and his ilk would suddenly determine that this president, in his final year of office, isn’t really a president anymore.

McConnell has embraced non-existent precedent, “the voice of the American people,” and, not least, his own desires to reach this conclusion. The plain text of the Constitution says otherwise.

True: The Constitution also empowers the Senate to “advise and consent” on judges. But I do not believe the Founding Fathers envisioned a near-total, near-permanent state of withheld consent, which is the power as it is currently practiced by the Republican Senate. Yes, the founders wrote checks and balances into the Constitution, but they weren’t seeking sclerosis: They were seeking an energetic government to replace the clogged-up, do-nothing Congress of the Articles of Confederation.

So we’ve reached a crisis of governance: A permanent, pre-emptive “no” from Republicans to a Democratic president is indeed a crisis. We cannot govern ourselves if we are in a state of permanent filibuster, permanent standoff, permanent gridlock. This moment is a test. And we’re already failing.

Ben Boychuk: Thirty years of bitter partisan division have brought us to this moment. This is not about principle and it’s only partly about process. It is really about the prerogatives of power.

Why are Democrats acting so surprised? They’ve been playing this game forever and, until this week, they’ve managed to do well at it.

Senate Minority Leader Harry Reid, of Nevada, warned his GOP colleagues on Tuesday that if they deny the president his Supreme Court pick, “(T)hey will ensure that this Republican majority is remembered as the most nakedly partisan, obstructionist and irresponsible majority in history.”

Otherwise, they would laugh at a cynical appeal to bipartisan cooperation from one of the most nakedly partisan, obstructionist and irresponsible senators of the modern era. Reid mastered the art of blocking Republican judicial nominees and paved the way for an aborted filibuster of Justice Samuel Alito in 2006.

What a difference a majority makes.

Sen. Chuck Schumer, D-N.Y., was the ranking majority member of the Senate Judiciary Committee in 2007 when he took a hard line against confirming yet another George W. Bush nominee to the Supreme Court following the appointments of Alito and Chief Justice John Roberts.

“We should reverse the presumption of confirmation,” he told the American Constitution Society convention. “The Supreme Court is dangerously out of balance. We cannot afford to see Justice (John Paul) Stevens replaced by another Roberts, or Justice (Ruth Bader) Ginsburg by another Alito.”

Ultimately, Schumer said, the Democrats “should not confirm any Bush nominee to the Supreme Court except in extraordinary circumstances.”

Last week, Schumer claimed that what he said in 2007 has no relevance to the present controversy. Citing his words to justify blocking an Obama nominee is “an apples to oranges comparison,” he wrote on blogging platform Medium. The Democrats, he says, would have at least given a Bush nominee a hearing.

Sure. Then they would have voted nay.

So, tough break for the Democrats. Call it obstruction. Call it gridlock. Or call it the Senate asserting its constitutional prerogative to withhold its consent. In any event, it’s ugly business. But you live by power politics, you die by power politics.