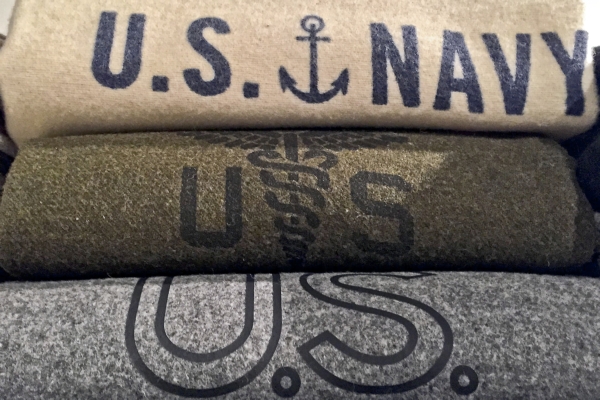 LAS VEGAS (TNS) — Staid and stylish home decor is under attack by a military aesthetic that is having a moment. The look is a by-product of a war culture that has grown up around more than a decade of global unrest and boots on the ground.

In the 1940s, battleship gray and army green were popular carpet and paint colors. Today those same hues are re-emerging with gray as a dominant neutral.

During the Winter Las Vegas Furniture Market, army green and khaki were evident in furnishings made from old military tents. United Strangers even used them to cover a console. The company also did a bedroll that doubled as a single mattress, ottoman or seat.

“I wanted to do furniture that had a story and would appeal to a younger demographic,” said company founder Logan Komorowski.

The native New Zealander said the core of his brand is products with a story behind them. He was designing for Halo and Restoration Hardware before branching out on his own.

“I loved the recycled look and thought about old army tents as a material,” he said.

The tents go through a four-stage washing process before they can be used as upholstery.

“We create a patchwork of the clean material and have three or four ladies constantly sewing it up,” he explained. All United Strangers pieces are done by hand.

Tents and truck tarps with more of a desert camouflage look were the raw material for handbags and duffles by Mona B, a fashion accessory company.

Another company targeting a more adventurous, youthful crowd is Uber Chic Home. Its designers took old grape harvest crates and framed them with metal to make benches with drawers and consoles. Recently, the company added vintage Swiss Army blankets purchased in Europe and turned them into bench covers and pillows. Old Czechoslovakian army blankets were used to make crosses and background fabric for some of the pillows.

BoBo Intriguing Objects also joined the Swiss Army theme with poufs, blankets and pillows in a number of color combinations.

The Swiss Army cross is currently one of the most popular motifs. Blue Ocean Traders, which does both one-of-a-kind furnishings and production pieces, was showing a traditional campaign chest in black lacquer with brass accents. It also comes in white and a soft green lacquer.

Campaign chests were made to travel with the army and used by high ranking officers. Unlike the real thing, the ones by Blue Ocean Traders do not come apart. The company also showed a one-of-a-kind lamp shade made from an old army helmet.

Remember those little green army men you played with as a child? Ink + Alloy has cast them in bronze to make very interesting unisex neckwear. The company also had a necklace made from recycled army boot laces.

Duke Cannon Supply Co. has a soldier-themed line of soap and shaving creams. The soaps are made from the same formula and in the same factory that produced soap for American troops during the Korean War. The company has a gift set of four soaps and a Stanley screwdriver packed in used cartridge boxes. Among the scents available: Naval Supremacy, Victory, Accomplishment and Productivity.

Danelle Cutting: Here’s what I do