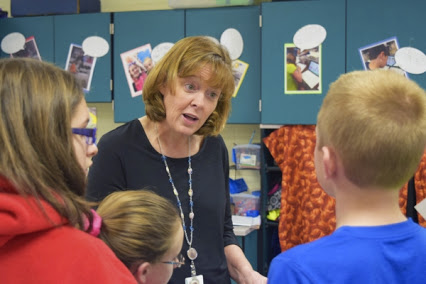 'This is a calling': Teacher of the Year Nancy Goodnight personalizes lessons to help students excel. Post file photo

A few years back, as I was addressing a group of teachers in a meeting, I alluded to the biblical phrase, “a teacher sent from God.” I then asked this group of educators if any of them had ever had a teacher in their lives whom they considered worthy of this title. I imagined everyone in the room would be more than eager to share about that one special teacher who had inspired them to become a teacher themselves, and that all I would have to do was facilitate the discussion because so many of them would be desirous to tell the group about their own stories and the individual or individuals who had touched their lives in a positive way somewhere in the past.

Not being prepared for the response I got, a fourth-grade teacher blurted out, “A teacher sent from God has never crossed my mind, but I have had some who might have come from the other place!”

I remember a time when I lived out of state in the 1980s and had come back home with my wife and small children for the Christmas holidays. We were out shopping and I happened to spot one of my former elementary school teachers who was working as a salesclerk. As soon as I entered the store, I suddenly turned around and walked out because I got a terrible knot in my stomach. My wife asked me what was wrong, and I told her that I couldn’t go in that store.

I explained later that my former teacher had made a sarcastic remark to me when I had been her student. I never would have imagined that one caustic comment would follow me through junior high, high school and college. Who says our words don’t have power and long-lasting influence?

On the other hand, although I don’t remember the name of my ninth grade guidance counselor, I do remember her affirming words when she told me I was a good speller. I have believed I could spell well ever since that single comment in 1969, whether it was true or not! Another example of a life-changing remark was from a college English professor who suggested I major in English. Ironically, he was one of the driest, most boring teachers I ever had, but his unsolicited words actually helped shape my future.

Of course, I had the high energy-teachers who always made things fun, and the serious teachers who pushed me further than I desired to go, but at the time, how could I have known that they were all “sent from God” to help me find my purpose in life? I wasn’t nearly mature enough to know how their daily influence and guidance would prepare me for a life of teaching others myself.

I was working on a memoir, and I wanted to get some of my facts straight before I finished the book, so my wife and I had lunch with them. They both told me, even before we ordered from the menu, that they might not remember what I needed to know, and that if I couldn’t remember the facts and they couldn’t remember, then they could tell me almost anything and I would have to believe them.

That’s true, because I would’ve believed anything they told me 52 years ago, and I would still believe them today.

You see, I was in the third grade when John F. Kennedy was assassinated, and a room filled with 8-year-olds needed a “teacher sent from God” on that terrible day in 1963. Fortunately, we had one. And fortunately, there are teachers all across North Carolina who could be called “teachers sent from God” this very day.