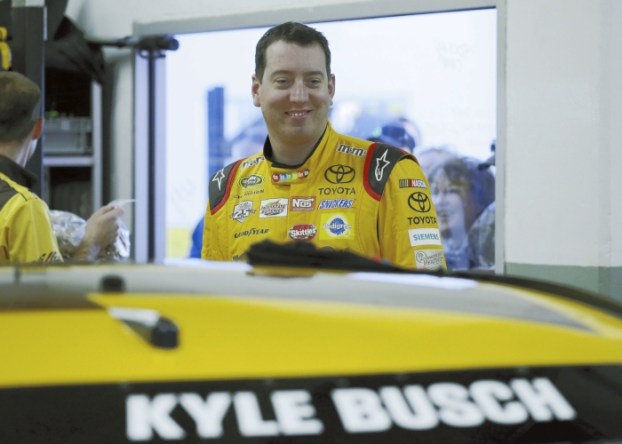 DAYTONA BEACH, Fla. (AP) — Kyle Busch was stuck in a hospital bed, the Daytona 500 just a race on TV.

Busch smiled for a photo with his dog and wife. He tweeted his support for Joe Gibbs Racing.

He was more hopeful of a comeback from broken bones than a championship.

Just a few blocks away a day earlier at NASCAR headquarters, Kurt Busch faced a final appeals panel, trying to get a suspension overturned for his role in a domestic dispute with his ex-girlfriend. He climbed into a waiting SUV that sped off, squealing its tires. Busch did not watch the Daytona 500.

Both Busch brothers were out of “The Great American Race” for the first time since 2000.

Fast forward a year, and Kurt Busch’s hiatus was a bump in what would become his best season in years. He won two races and earned a spot in NASCAR’s playoffs. He tweeted a photo Friday night with his fiance having a blast at a private party hosted by Jeff Gordon.

It sure beats where he was this time last season.

The brothers are back, each a Cup champ and among the small group of favorites Sunday in the season opener.

Kyle will slide in the No. 18 Toyota on Sunday, a year after he crashed into a concrete wall the day before the Daytona 500 and broke his right leg and left foot.

“I don’t necessarily feel any redemption,” Busch said. “I think if I could end up in victory lane on Sunday, then I certainly think it would kind of come full circle, essentially. I’d love to have that happen, but I’m not expecting anything from the racetrack or the racing gods to make that happen.”

Busch withstood multiple surgeries, went through a grueling rehabilitation program and missed only 11 races. He got back in his Joe Gibbs Racing Toyota in late May, and NASCAR granted him a waiver to race for the title should he earn a berth in the playoffs.

He won the season finale at Homestead-Miami Speedway to claim the title, and knocked Kevin Harvick from his perch as champion.

“It’s great to see both Busch brothers with a championship trophy,” Kurt said.

Kurt Busch won the title in 2004, the inaugural season of NASCAR’s Chase format. The system has been tweaked several times and starts the third year of an elimination format that sends four drivers to Homestead to race for the title. He drives the No. 41 Chevy for Stewart-Haas Racing.

Kurt congratulated Kyle on joining him to the Cup Club, but the brothers, who are not super close, did little celebrating together.

“I was real happy for him, but there wasn’t much time.”

The Busch’s have made names for themselves through the years as much for their prickly personalities as their talent in stock cars.

Known as one of most talented drivers in the sport, Kyle’s temperament often got in his own way. But he has mellowed with marriage, gained perspective after the Daytona wreck, and was determined to be on his feet in the delivery room when wife Samantha gave birth to their first child, a boy born in May — right after the driver returned to the race car and celebrated his 30th birthday.

She was by his side every step of his recovery and never complained when their bedroom underwent an extreme makeover into a hospital wing.

“It was quite chaotic and I’m sure it was tough,” Kyle said, “but she’s a tough cookie as well, too. I think it made us stronger, closer together.”

He still texts with Todd McCall, the doctor who repaired his right leg.

“It means a lot to me that he keeps up with what we’re doing,” Kyle said. “And for as much as he helped me getting back on my feet.”

And back with Kurt in the Daytona 500.