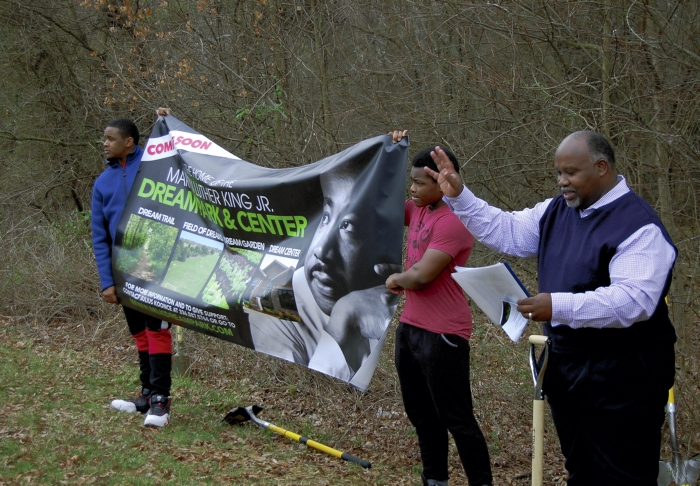 Amanda Raymond/Salisbury Post Community members came out on a cloudy Saturday to participate in the groundbreaking ceremony for the Martin Luther King, Jr. Dream Park on Martin Luther King Avenue. Pastor Julius Koonce, head organizer, said a banner would be put up to let the community know the park is on its way.

A groundbreaking ceremony was held for the Martin Luther King, Jr. Dream Park on Saturday before an excited and hopeful crowd.

Salisbury Mayor Karen Alexander kicked off the event by welcoming the attendees.

“Let us embrace Pastor Koonce’s dream today, as he is a foot soldier, and we also are, of Martin Luther King’s ministry,” she said.

LaShawn Williamson emceed the event and sang “To God Be the Glory.”

Julius Koonce, pastor of Christ Transformation Center, is the head organizer of the park. It will be located on the property around 910 Martin Luther King, Jr. Ave.

Koonce plans to convert the seven-acre wooded area into a recreational park. The park will have walking trails, recreational fields, an urban garden and a community building that the community can use for continuing education, personal development, substance abuse classes and other gatherings.

He said he thinks the park will bring a sense of hope and value to an underserved community.

Koonce told attendees that when he first came to Salisbury to pastor his church, he had no idea why he was sent, but now he does.

“Sometimes you have to lose your sight in order to gain a vision,” he said. “… You have to look beyond what you see and know that something else is going to come forth out of the ground.”

After taking over leadership of the church, Koonce reignited the idea of building something on the land that the church had purchased. Most of the land is in a flood zone, but 1.5 acres of it can support a building.

“There’s a couple things that this park is going to do,” Koonce said to the crowd, “It’s going to be a blessing, it’s going to help beautify the community and it’s going to cause people to believe again.”

Amen’s from the audience could be heard as he spoke.

Tammy Koonce, Julius Koonce’s wife, asked for help that anyone in the community could provide. As well as asking for prayer, she asked for financial donations and assistance from those with useful gifts and talents.

Bishop Russel Smyre, who helped Koonce come up with the idea for the park, prayed over the gathering. Pastor Glenwood Oats read a passage of Scripture and Pastor Bill Godair was the groundbreaking official.

After Koonce and his wife spoke, he invited city and county officials to break ground with yellow shovels. He also invited business leaders and pastors to turn over some dirt, and then invited anyone who wanted to shovel a little dirt to join in.

Before they broke ground, Koonce told the crowd to say “Hallelujah, glory to God” to get them started.

Rennetta Roberts, the praise and worship leader at Christ Transformation Center, said she thinks the park is the start of something great for the community.

“I think this is awesome, not just for African Americans, but for the community itself,” she said. “And Salisbury needs something like this for people to hope and dream for.”

“I think this is a very momentous occasion. We still live in a time where, no matter what the color of our skin, we need to come together and unify and stop dividing,” he said. “And I think that is what this symbolizes.”

Koonce said he felt like he got great support from the leaders and others from the community during the ceremony.

“I think, overall, the message was clear and people got excited about the fact that what they see now will change,” he said.

‘She is my angel’: Rescue is an answer to…