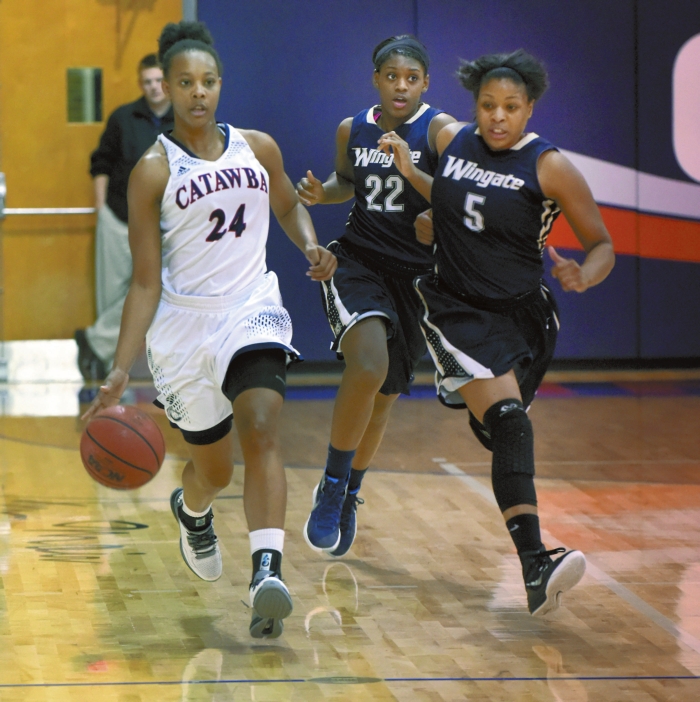 Wayne Hinshaw/for the Salisbury Post ... Catawba’s Jada Huntley (24), shown in a game against Wingate on Jan. 13, scored 17 points yesterday to lead the Indians past Brevard, 66-50.

SALISBURY — A victory culled from the ‘B’ list is still a victory.

That’s the stance the Catawba women’s basketball team took Saturday following a sleepy, 66-50 South Atlantic Conference win against last-place Brevard. The Indians made only 22 baskets, shot just 32.4 percent from the field and never got untracked until the fourth quarter — yet managed to win for the seventh time in their last eight games.

“(Brevard) had nothing to lose,” coach Angie Morton said at Goodman Gym, where Catawba (15-11, 12-8) prevailed in its final regular-season home game. “That made them very dangerous. They took a lot of shots, and if those shots were falling, we’d be in trouble.”

The victory, coupled with Lincoln Memorial’s loss to Queens, moved Catawba into a tie for fifth place in the league standings with two games to play. The Indians remain focused on finishing among the top four and hosting a SAC Tournament game on March 2.

“This wasn’t our best game but it still felt good,” junior Jada Huntley said after scoring 10 of her game-high 17 points in the fourth quarter. “We needed this game as much as we needed the win on Wednesday (against Queens).”

Catawba never landed a knockout punch against Brevard (1-23, 0-20 SAC), though it pulled away in the final period. The visiting Tornadoes shot only 31.7 percent from the floor and were out-rebounded 53-37, but hung around longer than expected.

“For three quarters it was a very good basketball game,” said Brevard coach Shannon Reid, one of Morton’s former players at nearby Pfeiffer. “It was pretty evenly played. But in the fourth quarter, we had a sequence of four or five straight turnovers. That gave them the separation they needed.”

Catawba trailed, 36-33, with less than a minute remaining in the third quarter, leaving Morton peering under the hood looking for a quick fix.

“A lot of things go through your mind,” she said. “I was extremely upset with our play. We were just missing a lot of easy shots. The shooting percentage shows that. I think if we make the easy shots it’s not even close.”

Forward Khadijah Brown — one of five Catawba seniors recognized before the game — said the Indians needed to take a deep breath and reassess their situation.

“We needed to slow down,” she said after netting 11 of Catawba’s first 20 points. “We needed to start making the easy shots and get stops on defense.”

Catawba took the lead for keeps late in the third quarter on last-minute baskets by Huntley and senior Zhaquondalee Greer. Teammate Emma Ucinski made it 39-36 on a strong dribble-drive from the right side just seconds into the final period. Less than three minutes remained when Huntley pulled up for short set shot from the right baseline, producing seven-point Catawba edge.

“Somebody had to take charge and get us going,” she said after shooting 6-for-15 and reeling in 10 rebounds. “We were probably too comfortable.”

It wasn’t until the Indians capped a 10-2 run with a pair of Serena Brown free throws — providing 58-47 lead with 1:27 to go — that this itchy wool sweater of a game at last felt comfortable.

“We played our best basketball in the last six minutes,” Morton said. “For once we got the ball to the right people and knocked down some shots. And we rebounded better and made our free throws. The last-game execution was really good today.”

Enough to bring a reckless afternoon in for a safe landing.

NOTES: Catawba has won 11 of its last 14 contests and closes its SAC season with games at Wingate on Wednesday night and at Lincoln Memorial next Saturday afternoon. Brevard has dropped 20 in a row. … Junior center Terri Rogers returned from an ankle injury and contributed five points and five rebounds in 15 minutes of action. Teammate Bri Johnson added 11 points and nine rebounds.