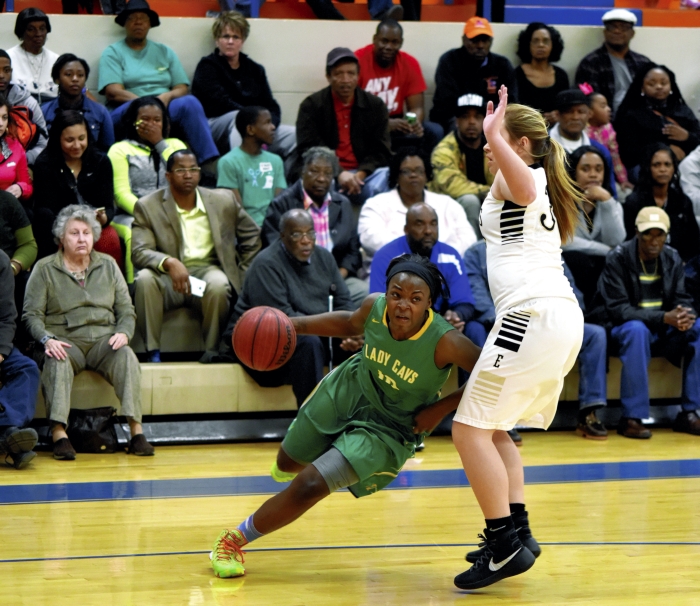 LEXINGTON — East Davidson’s girls are capable of playing flawless basketball in stretches, and they hit North Rowan with one of those perfect storms in Friday’s Central Carolina Conference championship game.
The final score was 58-43, but it wasn’t that close. The Golden Eagles basically decided the game at neutral Lexington High with a 28-point first quarter.
North led, 7-5, early after a Special Washington 3-pointer, but East Davidson’s devastating answer was 21 consecutive points for a 26-7 lead, mostly from the 3-point line. The second-ranked Golden Eagles (25-1) couldn’t miss for a stretch that lasted nearly five minutes. Bailey Plummer’s three-point play triggered the run, while Kendall Simmons’ 3-ball capped it.
“Just painful to watch,” North coach Brian Lytton said. “Give them credit. That’s a good team. If they get it inside, they get a layup. If you take away the layup, they kick it out and they can make shots. The biggest difference between them and us is shooting. Their shooting stood out tonight.”
Plummer, a 6-foot-2 Appalachian State signee who owns the state rebounding record, supplies East Davidson’s paint game and draws a crowd of defenders. Madi Hallman and Simmons can handle the ball, and those two and lefty Brooke Anders can drill the open 3-pointer.
“We came out focused and everyone was hitting their shots,” said Hallman, a Catawba signee. “We played as a team and we played unselfish. We got a lead so big that it was hard for them to come back.”
East Davidson coach Don Corry had seen his team play just as well two nights earlier when the Golden Eagles mauled Thomasville, 60-23, in a tournament semifinal.
“In the second quarter against Thomasville, we scored 28 and we only missed one shot,” Corry said. “We had a first quarter like that tonight. We took care of business at the start.”
Plummer (17 points), Simmons (16) and Hallman (12) scored in double figures for East Davidson.
Aliyah Farmer and Washington, who made four 3-pointers, scored 17 apiece for the Cavaliers (17-7), who are 1-8 against East Davidson the last three seasons. That lone victory was at Lexington High in the 2014 CCC tournament final.
North again played without Brianna White, its No. 2 rebounder and No. 3 scorer. White, who is dealing with a medical issue, usually contributes about nine points and eight rebounds.
“It hurt us bad not having her tonight,” Farmer said. “She’s a great rebounder and it was hard to get rebounds against that team.”
East Davidson cooled off in the second quarter, but North couldn’t make a dent in its deficit. The Golden Eagles led 39-23 at the break.
“We just started too slow,” Farmer said. “And we were making too many turnovers. We kept playing and we kept fighting. That’s all you can do.”
Corry said his team tried too hard to blow the game open in the second quarter and lost some cohesion and momentum.
“I told them to go get it, to finish it right now,” Corry said. “But we got sloppy, and North Rowan is a good team. They didn’t stop competing. They almost got back in it.”
The teams traded buckets in the second half. North got as close as 12 points twice — when Tre Allen scored in the lane to make it 39-27 early in the third quarter and when Farmer stuck in a layup to make it 41-29.
But no serious run ever came. It was close to impossible for North to string back-to-back buckets together. North missed the stickbacks that White usually provides, and Farmer, a 5-foot-9 senior who can leap tall buildings, couldn’t do it alone on the boards.
“We don’t always score consistently and we don’t always get the shots we want,” Lytton summed up. “We played them three times and we just never put offense and defense together against them. We did some good things in all three games, but never consistently and never everything together.”
North moves on to the playoffs and should be at home for the first round.
East Davidson moves on as one of the favorites to win the 2A championship. The Golden Eagles’ only loss was by one point on the road against 4A powerhouse Northwest Guilford.
•••
NOTES: Lytton hopes to have White back healthy for the playoffs. Farmer has a chance to reach 1,000 points in the playoffs. She has 959. … Tajah Oglesby made a 3-pointer just before the final horn.