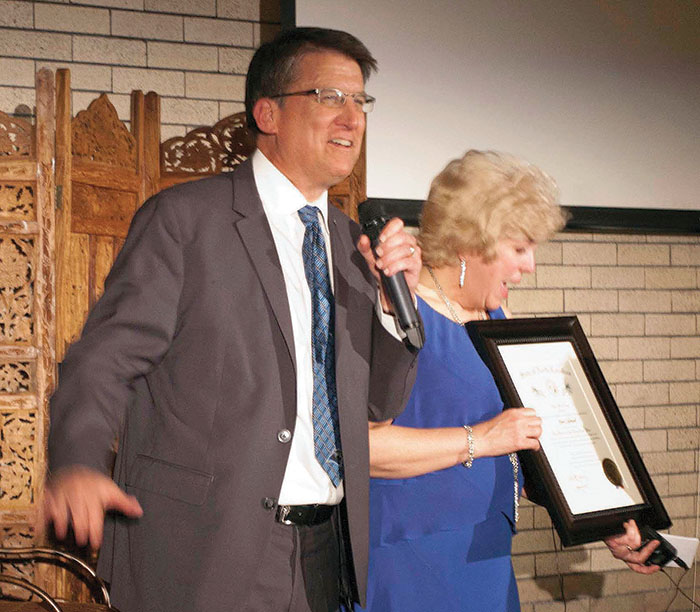 But the night of the Chamber Gala, Caldwell had her suspicions. She got her first hint that something out of the ordinary was happening when her mother walked in the door. But Caldwell’s mom assured her she was there because Trinity Oaks had a table with a few extra seats. But when her son, a medical student at East Carolina University showed up, she knew something was up.

She just didn’t expect that something to be the Order of the Long Leaf Pine.

“It was a complete shock,” she said, “because it just never occurred to me that that would be something I would be awarded.

Caldwell held a short Q and A with Governor Pat McCrory, a role she’d been informed about the day before. She’d spent time going over the questions, going over the order of ceremonies and practicing sitting on the interviewer’s stool in a dress. She’d even arranged an extra question with Governor – about his time at Catawba – to signal to him that the interview was complete.

But when McCrory finished reminiscing, he didn’t leave the stage as Caldwell expected. He began talking about leadership, she said.

“And I’m sitting there thinking, ‘What is he doing? We’re supposed to be getting off the stage?’ . . . and the whole time I’m thinking, ‘How am I going to cut off the governor?’ And then he pulled the award out and I was just stunned, because I didn’t see that coming at all,” she said.

The Order of the Long Leaf Pine is awarded to individuals who show extraordinary service to their communities and the state.

“This award will be granted to citizens who stand out in their communities and who have devoted their lives to serving others,” the North Carolina Governor’s website reads.

Caldwell said she was “very humbled” to be “singled out” by the award. All she’s done in her six years serving as NHRMC’s president is look for opportunities to help the community she knows and loves.

Caldwell was born and raised in Kannapolis, and graduated from A.L. Brown High School in 1975 and said she can count at least 63 family members who live in Rowan County.

To her, her work at Novant Health Rowan is more than just a job, it’s personal.

Part of Novant’s Mission statement is to “improve the health of the community.” And it’s a statement Caldwell takes very seriously.

Caldwell believes it is her duty as hospital president to be a community leader, pull others together and “serve as a catalyst” for furthering community wellness.

And while she “eats, sleeps and breathes” her career, in her six years as NHRMC’s president she’s made an effort to learn about Salisbury-Rowan from every angle, and work towards change wherever she can. Caldwell serves on the Board for the Chamber of Commerce, the Board for the United Way of North Carolina, the Government Affairs Committee, the Board of Trustees for Rowan-Cabarrus Community College and serves as an elder at First Presbyterian Church of Concord.

“I just try to look for opportunities to do things and to make a difference,” she said.

But sometimes, people find her first. Caldwell she was approached about providing furniture for Knox Middle School and helping fund a health coach and wellness program at Livingstone College, athletic trainers for Rowan-Salisbury high schools, free flu shots to guests at Rowan Helping Ministries and providing equipment and advice for a gym in the West End.

“Sometimes you have to look for ways to help and sometimes people come to you,” she said.

But half the battle is knowing a community well enough to identify areas for the hospital to step in, and knowing how to help people figure out what they need.

“Sometimes, it’s the little things that make the biggest difference,” she said.

And she’s seen how her projects have affected her own family. Early in her time at NHRMC, Caldwell pushed forward and executed the construction of a hospice house – a facility where her mother-in-law and sister were cared for before they passed away.

For Caldwell, the Rowan-Salisbury community is everything. She manages to find time between her career and community involvement to read spy novels and garden, but says she loves to see people from Rowan shine. She mentioned the Rowan Little League girls softball team’s recent World Series championship win, and said she was impressed not only with their gameplay, but their poise and eloquence. “I’m always proud when people are able to represent Rowan County . . . in a way that shows the value that we have of Rowan County . . . to me that’s the best thing,” she said.

In the future Caldwell hopes to be able to offer “one stop shop” cancer services and to expand behavioral health services in the area. And while her drive for community improvement is probably best summed up by an old scouting rule, it’s one she plans to see through for as long as she can.

“My whole thing is,” she said, “you always want to leave a place better than you found it . . . So, to me, when you go into a community it needs to be better than you found it if you leave . . . You’re never going to find a perfect world, and if you have things you’re concerned about, you have two choices: you can either get involved and try to make them better, or you can turn your back on it. And I can’t turn my back . . . To me that’s what makes life meaningful, is to be able to have a chance to make things better for other people. And that’s what matters most to me.”