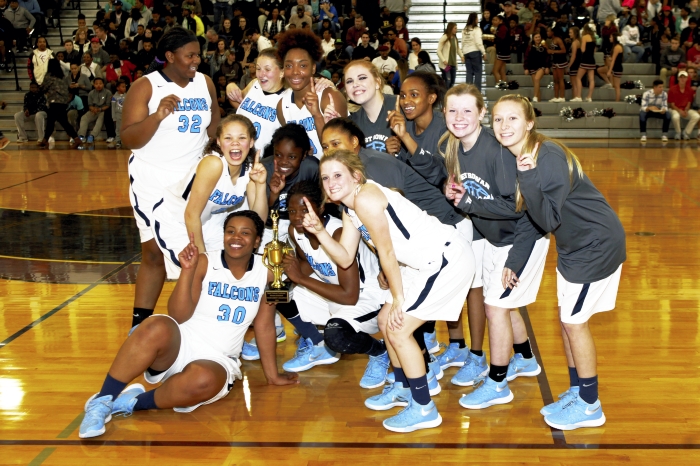 CONCORD — Down by six points with just under five minutes to play, the West Rowan girls had Hickory Ridge right where they wanted them.

The persistent Falcons battled back, came up with two key steals in the final minute and survived a last-second shot by the Ragin’ Bulls to claim the South Piedmont Conference Tournament championship, 52-51, Friday night at Cox Mill High.

The second steal, by senior guard Taylor Martin at half court, led to the game-winning basket by freshman Mary Sobataka with 10.1 seconds left.

Hickory Ridge called timeout, then guard Stacia Means drove the length of the floor with West senior Khaila Hall right on her hip. Means curled around the right side of the lane and put up a decent short shot but the ball skimmed right over the rim as the final horn sounded. West Rowan survived.

“This team won’t quit,” winning coach Ashley Poole said. “That’s why they are as good as they are. They always bounce back and always believe they have a shot to win.”

For now, everything is golden for the Falcons (25-2) as they have won 17 in a row to go with a regular season and now an SPC tournament title. West now has a full head of steam as a No. 1 seed in the state 3A playoffs opening next Tuesday with the Falcons hosting a first-round game. The tough luck Ragin’ Bulls (22-4) lost for third time to the Falcons this season, and in each loss, they let a sizable lead slip away.

The Falcons’ rally really started with three minutes left in the third quarter when they trailed, 40-30, and seemed overmatched in an eight-point quarter as the Bulls controlled the boards on both ends. But Sobataka drained a 3-pointer, then Hall and Egypt Alexander scored inside to make it 40-37, heading to the fourth.

Sobataka, a 5-6 guard, then scored the first three points of the final quarter and followed up with two more long bombs to cut the West deficit to 49-48 with just under three minutes to play. Martin, at 5-2, completed the rally when she snatched a rebound (her eighth) and drove the court for a layup and a 50-49 West lead.

Hickory Ridge forward Gabby Smith muscled in a layup at 1:42 to put the Bulls back up 51-50, setting the stage for a true agony and ecstasy sequence that produced the West Rowan win. First, Hall stole the ball and seemed headed for an easy layup with about 20 seconds left when Hickory Ridge’s 5-11 forward, Sydney Miller, soared in from behind and blocked the shot and recovered the ball.

The Bulls started the other way with the lead and the clock running down when Martin and Alexander closed in at the half court line and forced the crucial steal. Martin fed it to a wide open Sobataka, who had lagged behind and was still near the West basket. She completed the snowbird layup with 10.2 ticks left for what proved to be the game-winner.

“It felt great,” said Sobataka, who scored a career-high 21 points to lead the win. “I was just hoping Taylor knew I was back there and open. It feels amazing, but we fought hard and we deserved it.”

Although Sobataka experienced a championship season in her first year, it was really the culmination of a three-year development process for Poole and her Falcons. “We took our lumps during that long process but it is nice to see it play out especially for my seniors.”

One of those seniors, Martin, who is headed to Catawba on a softball scholarship next season, says the tense win was all about the right attitude. “Coach Poole told us over and over that the team that wants it more and fights the hardest will win,” she said. “This really puts us on a high level heading to the playoffs next week”

Following Sobataka in the scoring was Alexander with 10, Hall with eight and Martin with seven points and eight rebounds. Bulls’ point guard Jiera Shears led her team with 11 points, followed by Miller with nine points and 12 rebounds — most of them on the offensive end.

As expected, the Coach of the Year honors went to West Rowan’s Poole.