Wayne Hinshaw column: Personality is for the birds 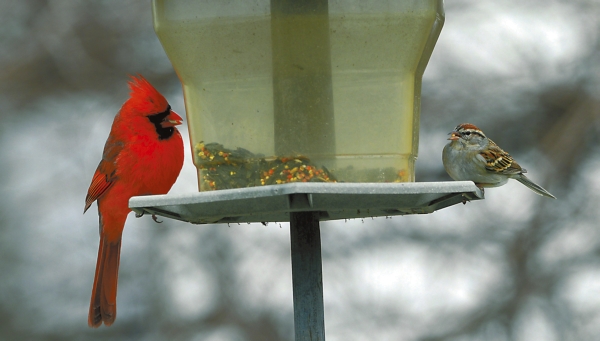 A male cardinal and a sparrow share the bird feeder while keeping their space. Both have seeds in their mouths. Wayne Hinshaw/For the Salisbury Post

Birds have personalities. What an opening statement. Has old Wayne’s brain taken flight over to the “bird brain” side of the norm?

Recently during the extra cold weather, watching the wild birds gather food and try to survive has become a passion with me. Well, maybe not a passion. I don’t have anything else to do but watch my feathered friends. I observed that birds in my backyard behave in different manners just like humans. Birds of the same species sometimes act differently, showing their individual personalities.

Personalities in humans are determined by the way we organize our  “thoughts, feelings and behaviors,” making us “a one of a kind,” special human. Can birds meet this standard? Can we think of these unique flying creatures in the same perspective as humans? The National Wildlife Federation says that scientists first studied personality of the octopus in 1993, in the first such study on nonhumans.

Since, biologists have completed studies on bluebirds, Australian Gouldian finches and the personality traits of eagles, doves, owls and peacocks. Richard N. Stephenson developed a “Bird Personality” quiz. Using a dove as an example, he writes that, “the dove is symbol for peace and easy going.” Doves tend to avoid conflict and don’t take risks. Doves seem unsure, passive and predictable when you apply human traits.

I’ve watched the big-breasted doves slowly walk around my feeder with their heads nodding up and down as they walk. They certainly avoid any conflict with the other birds and stay out of the way.

When the big blue jay comes to feed, he is loud and noisy and has his way at the feeder. The other birds clear the way for the colorful, squealing blue jay. The same can be said for the big bully crows that land in flocks. The grackles and starlings are equally aggressive and noisy when they take over the feeder. Interestingly, these species never come to feed at the same time.

The little petite chickadees fly to the feeder and grab one seed then fly to a tree limb to eat the single seed before coming for another seed. At times, they too like to hang upside down on the suet feeder. Tufted titmice are perky, quick little birds with big black eyes and crested heads. The chickadees will often dart in and steal food from other birds, especially the tufted titmice. Chickadees are like the small guards on a basketball team who have no size but great speed for darting in and under the bigger players. Twice I had to rescue a tiny chickadee that crawled up into my feeder going after that one special seed.

During the coldest days, dozens of juncos (snowbirds) came to feast.  With warmer days, they have moved on.

The wrens and finches like to sing for their meal. At times the cardinals will join them as a trio in the trees nearby and provide song.

Starlings and sparrows often find the quickest way to get their food is to take it away from other birds. Birds, like humans, will feed wherever they can get food the easiest with the least effort.

Birds like to have their own individual space. When two birds get too close, one will move away. Often when a bird lands at the feeder, other birds will leave at once. Male birds like more space unless it is their mate.

Bird species seem to have a “pecking order” with each knowing “their place.” Some bird species always yield to certain other species.  When a bird ignores their place in the “pecking order,” you will see the offended bird fluff his feathers and point his bill as a warning, demanding respect. Older birds always expect the young to move out of their way at the feeder.

The one yellow-bellied sapsucker (woodpecker) is a loner at the feeder. He seems to prefer eating suet while hanging upside down.  Woodpeckers usually spend their time pecking on my maple tree, gathering sap with their tongue or eating insects buried in the tree bark, but they have learned it is easy to eat a little grain at the feeder. They are always left to eat alone by the other birds.

Birds, at times, will stop eating and stretch their bodies by opening one wing fully and extending it. Then doing the same with one leg at a time. We humans like to stretch in the morning or after sitting a long time. I don’t know why we stretch, but it feels good so I assume the same is true for birds.

Well, I have written too long, but maybe you get the idea that birds might have personalities like humans. If not personalities, the action around the bird feeders certainly does mimic the actions of humans.

We have peacemakers who are caring (doves). We have big bullies who are loud and boisterous (blue jays). Grackles, starlings, and crows act like hooligan gangs with their intimidation. The cardinals are the beauty kings and queens, acting with a bit of royalty as they strut their crowns. The woodpecker is a loner and makes us worry about his intentions. Our resident thieves are the chickadees and sparrows taking food away from the birds who have worked for their food to only be robbed.

Maybe the sparrows can redeem themselves in the backyard by singing with the finches and cardinals from the tree tops. They do make a pretty, pleasant sound.