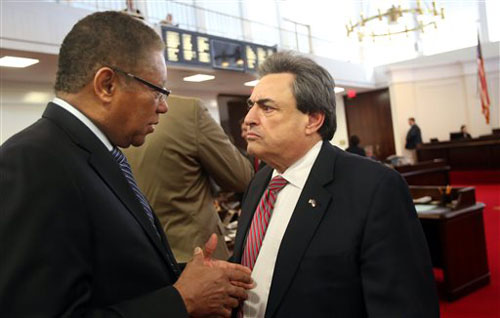 Senators/ Dan Blue, D, left, and Bob Rucho, R, right, huddle before a morning session of the N.C. Senate on Thursday, Feb. 18, 2016, in Raleigh, N.C. A North Carolina Senate committee has approved a new map of congressional districts. The full chamber is scheduled to vote on it later Thursday afternoon.(Corey Lowenstein/The News & Observer via AP)

RALEIGH (AP) — The Latest on the North Carolina legislature debating a congressional redistricting map in a special session (all times local):

Both chambers of the legislature have now agreed North Carolina’s congressional primary elections should be held June 7 and that no primary runoffs will occur in 2016.

The Senate voted 29-15 on Friday for an updated timeline that would still keep all primaries other than those for the U.S. House on March 15 as scheduled. The House approved a slightly different version Thursday but was expected to back the minor change later Friday. Gov. Pat McCrory would be asked to sign the legislation.

A reworked schedule was needed because a federal court blocked elections under the current congressional maps. The legislature near final approval on new boundaries Friday.

The updated schedule and map wouldn’t be used if the U.S. Supreme Court steps in and stops the court order.

State legislators are debating the Republican-drawn congressional map with an eye toward showing legislative intent for a future court challenge.

Rep. Mickey Michaux told majority Republicans that the map’s likely passage Friday means the next step is waiting for judges to decide if the congressional district lines are legal and valid. The Durham Democrat would not say whether the Legislature’s minority party has an alternative map ready to offer judges overseeing the case.

The chief House Republican involved with redistricting says since Democrats didn’t offer their own alternative, they shouldn’t complain about the result. Rep. David Lewis of Harnett County says the GOP made a legitimate effort to include lawmakers who wanted to participate rather than organize opposition.

It was a very short list of those who showed up to address a House redistricting committee about a proposed redrawing of North Carolina’s congressional districts.

Only one person spoke Friday morning during a public comment period organized by the committee in Raleigh. The public hearing was announced Thursday afternoon. Nearly 80 people spoke Monday at a public hearing held at six locations statewide.

Friday’s lone speaker was Blake Tedder of Hillsborough. The unemployed social worker urged lawmakers to revise the districts now intended to help Republicans preserve their current 10-3 seat advantage in the state’s congressional delegation. He said more speakers would have come but he doesn’t think people believe legislators are listening to them.

The House was expected to finalize the map later Friday.

The House and Senate are expected to wrap up a special redistricting session Friday. That’s the deadline in a federal court order demanding new congressional boundaries because judges found two districts were illegal gerrymanders.

Republican lawmakers disagreed with the ruling but redrew lines in case the U.S. Supreme Court doesn’t block the order. The current boundaries would remain intact and the congressional primary would go on as scheduled in March if the justices intervene.

The contingent election calendar keeps all other primaries on March 15. But there would be no primary runoffs this year. Usually a candidate must get at least 40 percent to avoid a runoff.