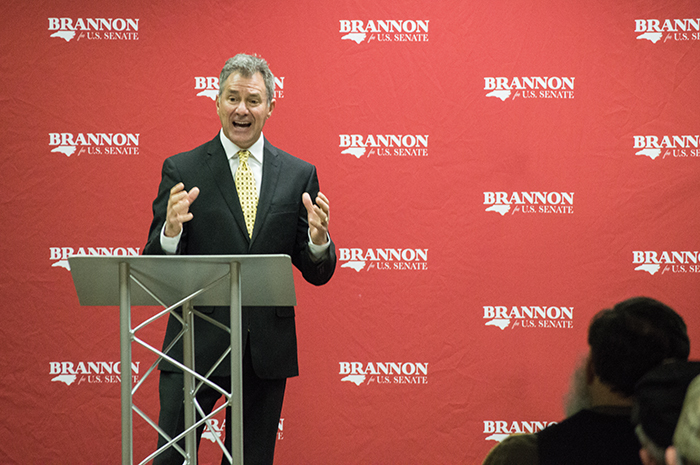 Brannon, a Cary physician, held a town hall meeting Thursday at The Event Center on Webb Road and dished out wide-ranging criticism of Burr. The Constitution, Brannon said, should be a strict guide for decisions made by members of Congress. He likened the Constitution to the hippocratic oath taken by physicians.

“This campaign I’m mocked because I talk about the Constitution,” Brannon said. “If you came to me and I have the honor of being your surgeon and I didn’t talk anatomy and physiology, would you trust me? With a pilot flying a plane or an engineer building a building, you always have an authoritative structure of documents to go by. But not government?”

“Is it conservative to fund an unconstitutional executive order to have amnesty?” Brannon asked. “That’s Obama’s plan. See, (Burr has) not done the job of hindering President Obama. He’s actually aided him in fundamentally transforming America.”

He said Burr has voted to move controversial policies to the floor, then voted against the policies upon final consideration.

Brannon said voters deserve answers from Burr about questions being raised. A debate is one way for Burr to defend his record, Brannon said.

“And, I really think Senator Burr might be in the witness protection program because he won’t debate me,” Brannon said. “This is not his job. This is your job. You are interviewing us. If he can’t come up and answer these questions, then why do we want to rehire him.”

Brannon cited the fact that he debated Sen. Thom Tillis before the 2014 Republican primary. He said Burr should do the same.

When asked if he agreed with Burr on any policy matters, Brannon would only say that Burr believes in a “bigger government than I do.” Brannon said he believes in a constitutionally limited government.

“What has he done to shrink government?” he said. “Can you name one?”

A self-described “Tea Party leader,” Brannon at various points referenced government agencies he would work to eliminate. After his town hall meeting, Brannon clarified that the Internal Revenue Service, Department of Education, Department of Agriculture and Bureau of Land Management would be on the list. He said a number of duties performed by federal agencies should be left up to state governments.

Including Burr, four Republicans who have filed to run for North Carolina’s open seat in the U.S. Senate. Other candidates include Dudley resident Paul Wright, and Greensboro resident Larry Holmquist. A poll released Thursday by Raleigh-based Public Policy Polling shows Burr with 56 percent of the vote. Brannon sits in second with 13 percent. Wright and Holquist sit at 4 percent and 3 percent respectively.