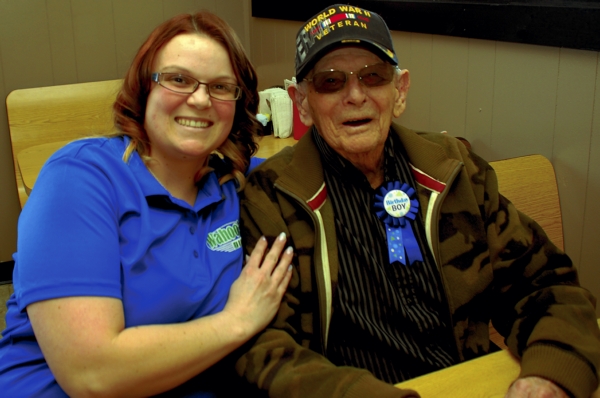 GRANITE QUARRY — The chalkboard at Wahoo’s Diner lists the day’s specials. Thursday, they were the sausage and cheese omelet for $4.30 and the open face country-style steak with fries for $6.49.

VanHoy already had a booth reserved and waiting for Charles Odom, who prefers to be called “Charlie.” Besides the message on the daily specials board, VanHoy placed “Happy Birthday” decorations on the window dividing her dining room sections, and on the table were a couple of cards also waiting for Odom.

If anyone’s a regular at Wahoo’s, it’s Charlie. He usually walks through the door around 1 p.m., and VanHoy or waitress Diane Brandt know he’ll want sweet tea to start.

“Since we’ve opened,” VanHoy said, “I can count on one hand the times he has missed.”

Wife Thelma and daughter Tina brought Odom to the restaurant Thursday. He was proudly wearing a ribbon on his shirt that said “Birthday Boy,” and after a congratulatory hug from Brandt, he sat down in the booth with Thelma and placed his order, as if the folks at Wahoo’s didn’t already know.

“I like a hot dog and home fries,” Odom said, explaining how the home fries are softer and easier to chew. “It’s the only place you can get the home fries that I know of.”

Thelma asked for one of her favorite sandwiches, the chicken filet. She said the pimento cheese sandwiches also melt in her mouth.

“The boys in the kitchen — they’re good to us,” Charlie said.

In recent years, Charlie Odom has had to deal with a stroke and a loss of hearing common for his age, but it hasn’t dampened his lust for life. Coming to Wahoo’s every day from the couple’s home in Rockwell forces him to get out and socialize — and Odom is good at that.

He likes to wear his World War II veteran’s ballcap and a camouflage jacket betraying the days when he enjoyed running his pack of beagles and shooting rabbits.

Odom grew up in Hoke County as the son of a barber. His dad cut hair for 50 years and also taught him to hunt and fish.

“He was the motor for his daddy’s boat,” Thelma said with a laugh.

Charlie entered the Army in March 1943. During the World War II fighting in Europe, he earned five battle stars, including one for the Battle of the Bulge. He was part of an ordnance company that had advanced into Germany by war’s end.

To this day, Odom is grateful he didn’t have to pack up and ship off for the fighting still going on in the Pacific Theater. When he came back home, he took a job at the funeral home in Rockwell that was run by his uncle, Council Powles.

Odom wasn’t a big fan of working at the funeral home, but it’s where he met Thelma during a reception. Thelma said if the couple make it to October, they will have been married 68 years.

They still live in their first house in Rockwell.

But Odom said his big break came when he was among the first hourly workers at the new Fiber plant on U.S. 70 in 1965. Odom would work there until his retirement in the 1980s.

Thelma said her brother was instrumental in getting Charlie — she prefers to call him “Charles” — the job at Fiber.

Outside of work, Odom remained an avid hunter and fisherman.

“I’d go to High Rock Lake and stay all day,” he said. He and a buddy also liked to take regular fishing trips to the coast.

Besides getting out the house, why does Charlie Odom feel compelled to eat at Wahoo’s every day?

“I like the food, and they’re friendly,'” he said.

The feeling is mutual. VanHoy will tell you — Charlie Odom is a daily special.