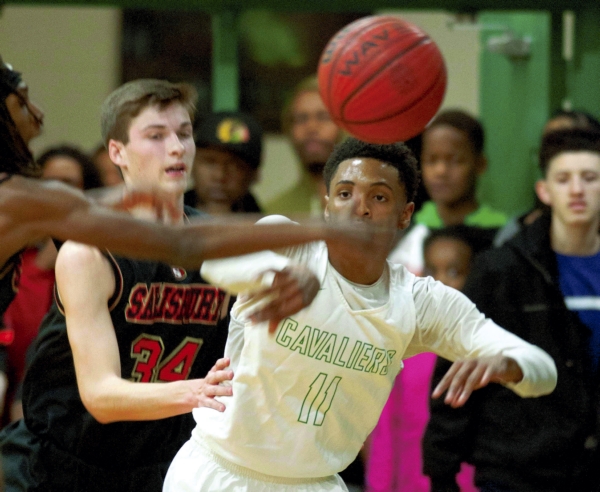 SALISBURY — A lot of folks associated with Salisbury and North Rowan high schools will be holding their collective breaths today.

It’s been a week since the boys basketball teams at Salisbury and North Rowan were involved in a bench-clearing situation that ended the regular season finale after three quarters. The game was being played in Salisbury’s gym.

With North Rowan leading, 62-36, the third quarter ended and both teams made their way back to their respective benches. Salisbury’s Shaleek Williams reportedly struck North Rowan’s Jalen Sanders in the face, which began the scuffle.

As the three game officials began to address that initial act, the situation began to escalate, especially when some of the fans began to rush the court. The game officials ruled that most players on both teams were guilty of leaving their benches to participate in a fight.

The conference call is part of the appeal process which RSS applied for on Wednesday, after the NCHSAA made its initial decision on Tuesday — basically ending the season for both teams.

Both principals, Luke Brown of Salisbury and Dr. Fateama Fulmore of North Rowan, received letters on Tuesday that upheld the suspensions of nearly 20 student athletes, from the two squads. That number of suspensions easily tops the minimum of six ejections that prohibits a school from participating in the playoffs.

North Rowan, 20-2 and ranked No. 2 in the state (2A), and Salisbury, 18-5, were both playoff-bound prior to last Friday night. North was 10-0 and regular season champs in the Central Carolina Conference while Salisbury finished in second place with a 7-3 record.

Obviously, neither team was allowed to participate in this week’s CCC Tournament in Lexington.

After a meeting on Wednesday meeting, led by RSS superintendent Dr. Lynn Moody and Paschal, an appeal was sent to NCHSAA in Chapel Hill, seeking another look at the three game officials’ report of what actually transpired during the scuffle.

Administrators believe that both teams had players suspended unfairly — some had only stood up at their benches because the third quarter has just ended and a timeout was in session.

“We’ll have a chance to present our case and then we will be excused from the call and the executive committee will talk things through,” said Paschal. “We’re hopeful that we will have an answer within hours or by lunchtime.”

Paschal said that a video not originally sent with the appeal was forwarded to the NCHSAA on Thursday.  The footage was taken by an anonymous fan and given to WBTV in Charlotte. It can still be viewed on that station’s website.

“We felt that this video is a better representation of 30-45 seconds of the aftermath,” said Paschal. “We hope it will help us. It’s more video than we had before and to me, it shows that there were not 19 kids on the court to fight. You see some kids trying to walk off or restrain others and just a few kids acting inappropriately.”

Paschal acknowledged that for either Salisbury or North Rowan to be reinstated for the playoffs, the executive committee will have to overturn enough player ejections to get the teams under the “magic number” of six students who left the bench during a fight.

Actually, that number is even lower when it comes to fighting. If a school has three or more players ejected for fighting at any point during the season, it is not eligible for the postseason.

“We’ll see,” said Paschal. “It’s up to the committee to make the final interpretation. We’re just going to make sure that we present the case in its fullest. That latest video is a little bit more than we had before.

“However it plays out, it plays out, and we go from there,” continued Paschal. “If our appeal is unsuccessful, at least we know we did everything that we could possibly do in this unfortunate situation.”

In addition to himself, Paschal expects the conference call to include Dr. Moody, the two principals and the two athletic directors, Dale Snyder (Salisbury) and Ben Hampton (North Rowan).