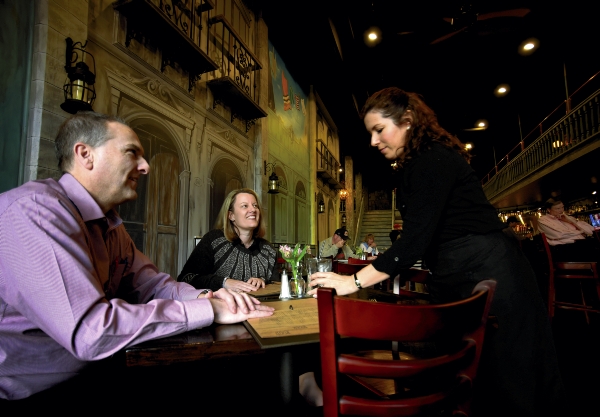 Ariella Sanchez is a long way from her cafeteria-style restaurant at the Innes Street Market.

Mambo Grill & Tapas, a Cuban restaurant, will be hosting a grand reopening at its new location this Saturday.

The restaurant was formerly on South Fulton Street, but moved because they needed more space. Before that, the restaurant opened at the Innes Street Market in 2008.

The new location is at 122 E. Fisher St. in downtown Salisbury.

“It’s just really humbling to see where we started,” Sanchez, owner of the restaurant, said while thinking about the eight-year anniversary the restaurant celebrated earlier this month.

The restaurant held a soft opening about two weeks ago, Sanchez said.

She said the soft opening gave customers the opportunity to get used to the new menu and gave employees time to adjust to serving more customers.

The space can seat 163 guests, up from seating 78 at the last space.

Sanchez said the redesigned menu includes new appetizers and a new entrée that she said was “a humongous hit.”

The pork dish is roasted overnight for around 12 to 14 hours. Sanchez said it has garlic and citrus flavors and is similar to a beef dish that was a favorite at the former location.

“We basically prepare it to where it’s really nice and tender on the inside and then crunchy on the outside,” she said.

As far as the rest of the restaurant, there are two floors. The lower floor is open during lunch and weeknights and the upper floor will be open on Friday and Saturday nights.

There are tables for small and larger groups.

Some of the walls are painted gray with light blue splotches. Other walls are painted in yellow, green, blue and gray shades and look like the outside of apartment buildings, with doors, windows, planters and lanterns. There are also framed posters of city streets and scenes hung around the restaurant.

“We really wanted it to feel like you were walking through the streets of Havana and give you that feel of being outdoors,” she said.

Sanchez said the artist they hired to decorate captured her vision for the new restaurant very well.

Sanchez also said moving into the building was like merging historic Salisbury and Cuba. While adding new décor, Sanchez kept some of the building’s original railings and wood paneling.

It was because of the city’s support that they were able to grow, Sanchez said, and customers have responded well to the new space.

“It’s fun to see (the customers’) faces and for them to be like, ‘Wow, it feels like we’re not in Salisbury. The moment you walk in here, it feels like you’re in a different place,’” she said.

Sanchez said she added walls in the space because she wanted to keep the same intimate, family atmosphere that guests enjoyed at the former location. She said the meals are still made from family recipes and her family is still very much involved.

“It’s still my father’s recipes, my brother-in-law is still the one cooking,” she said.

Sanchez has also merged the MG Lounge into the new restaurant. The restaurant offers 20 craft beers on draft, cocktails, shots and tapas.

The grand reopening will be taking place Saturday. There will be a ribbon cutting at 6 p.m. and Jutaun, a band based in the South New Jersey and Philadelphia area, will be performing. The band is a fusion of classic soul, folk, 1980s classic rock and pop, African and reggae music, according to its Facebook page.

The restaurant will also have piano music playing in the background for the night.

Sanchez said guests who would like to dine with them for the celebration should make a reservation.

Sanchez said she and the restaurant staff are working hard to accommodate all of their guests. One thing that she has heard is that even though they are in a new space, customers can still find the same great food.

“Everyone keeps saying, ‘Not only have you moved to a bigger location, but the food tastes exactly the same, if not better than it did before,’” she said. “So that’s what makes us happy, knowing that the customers are still enjoying our food and they don’t feel we’ve changed the integrity of what we’ve always served our guests.”