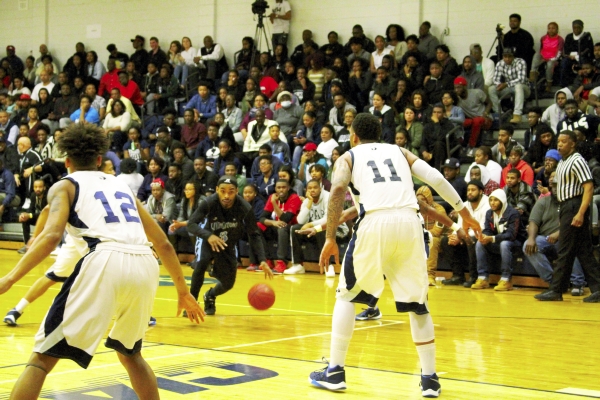 Livingstone sports information ... Livingstone guard Daryl Trynham looks to drive into the lane during last night’s CIAA game against St. Augustine’s in Raleigh. The Blue Bears fell to the Falcons, 70-64.

St. Augustine’s had one player in double figures — Sycoya Dorsey, who led all scorers with 24 points.  She also had 10 rebounds. Shelby Stokes grabbed a game-high 13 rebounds for the Falcons but scored just five points.

Livingstone concludes the regular season on Saturday at Winston-Salem State with a 2 p.m. tipoff. The CIAA Tournament will begin in Charlotte next Tuesday.

Ty Newman continued his good work for the Blue Bears, leading the team with 21 points on 10-of-17 shooting. He made one free throw.

Quincy January led St. Augustine’s with a double-double, 17 points and 11 rebounds. Anthony Gaskins led the Falcons in scoring with 22 points.