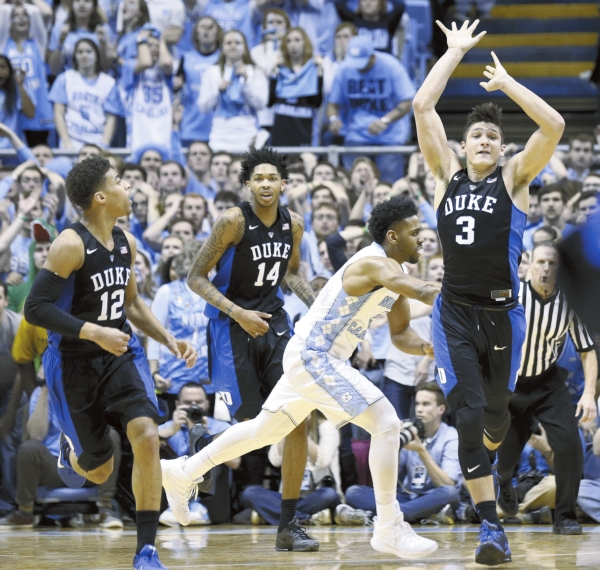 CHAPEL HILL (AP) — On a night when Duke trailed most of the way, the young and short-handed Blue Devils figured out how to push ahead at the end against their fiercest rival.

“We just hung in there,” Duke coach Mike Krzyzewski said.

Grayson Allen scored 23 points and freshman Derryck Thornton came up with the clinching block on the final play to help No. 20 Duke edge No. 5 North Carolina 74-73 on Wednesday.

Allen hit a pair of free throws with 1:09 left for the lead. Then Duke (20-6, 9-4 Atlantic Coast Conference) came up with a pair of stops in the final minute, first on a shot attempt inside in traffic by Kennedy Meeks.

Then, on UNC’s final possession, Thornton blocked Joel Berry II’s shot in the lane. Allen rebounded the ball and flung it into the air to let the final seconds expire, and then the players raced to the bench to celebrate.

Brice Johnson had 29 points and 19 rebounds in a dominating performance for the Tar Heels (21-5, 10-3), who came in with a decided edge in size and depth. But Johnson got little help outside of Justin Jackson’s 13 points, with the Tar Heels sputtering down the stretch after leading by eight with about 7 minutes left.

Most notably, UNC senior guard Marcus Paige — the preseason ACC co-player of the year — finished with seven points on 2-for-10 shooting, including an 0-for-6 showing from 3-point range to go with three turnovers.

It was a tough-nosed performance by the Blue Devils, who came in short-handed with largely a six-man rotation, and then lost guard Matt Jones to a first-half ankle injury.

What was left was enough, with freshmen Brandon Ingram (20 points) and Luke Kennard (15 points) coming up with huge baskets down the stretch.

Duke shot just 42 percent and made only three of its seven 3-pointers after halftime. But as the Blue Devils did all night, they proved tough enough to keep coming up with answers every time the Tar Heels were building momentum.

It was a matchup worthy of the famous rivalry, with UNC leading most of the way but the Blue Devils never letting the deeper Tar Heels out of reach.

UNC took its biggest lead at 68-60 on Justin Jackson’s putback with 6:49 left, only to see Ingram score three straight times and Allen follow with a three-point play that cut the deficit to one entering the final 4 minutes.

Kennard came up with a 3-pointer at the 2:39 mark for a 72-71 lead, Duke’s first lead since midway through the first half.

Meeks answered with a layup, only to see Allen put the Blue Devils ahead for good at the line.

Duke travels to No. 18 Louisville on Saturday.