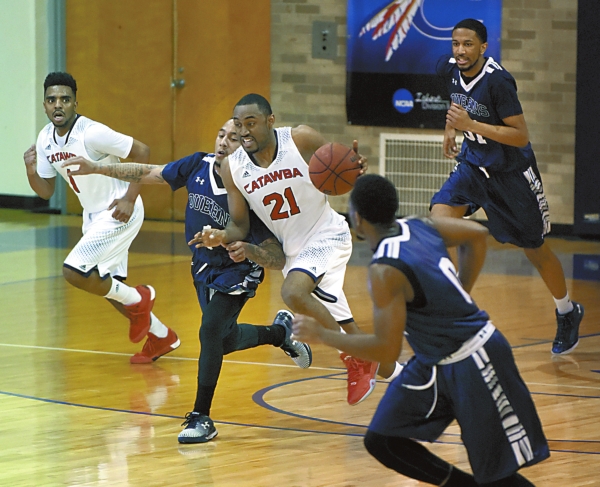 SALISBURY — Kendall Jones fired a lob pass toward the ceiling, and 6-foot-8 Todd Withers came from the rafters for a slam dunk that belonged in an NBA arena.
Queens played at a lofty level on Wednesday at Goodman Gym, at a level where Catawba just isn’t ready to go yet. The Royals blew out the Indians, 95-77.
It was somewhat worse than it looks. After dunks by Withers and Rob Lewis, Queens held a 32-point lead with four minutes left to play.
Queens (23-2, 17-2) has a roster full of studs, including D-I transfers, and shot 60 percent in the second half of the lopsided SAC contest. The Royals shot 55.7 percent for the game.
“They’re the most talented team in our league,” Catawba coach Rob Perron said. “They know their roles well and they do a good job with all that talent. You turn it over, and it’s points for them. You miss a boxout, and it’s points. You pay for every mistake.”
There was little doubt about the outcome after the Royals, who are ranked sixth in one D-II national poll, pushed to a 22-10 lead midway through the first half.
Catawba was down 35-25 late in the half, but Queens closed the half with a 10-3 spurt for a 45-28 lead at the break. At that point, the alternative of watching Duke-North Carolina on television was starting to look appealing to Catawba fans.
Catawba shot just 25.8 percent in the first half, and Withers’ seven rebounds matched the combined total for the Indians’ four big guys.
“We did play some decent defense in the first half,” said Queens coach Bart Lundy, who broke the program record with his 169th coaching victory. “We’ve had a good year. We’re athletic, we play hard, and we can bring good guys off the bench.”
Still, Queens looked human early in the second half, and Catawba made a mini-run. When Jameel Taylor rolled in a layup with 15:04 remaining, the Indians trailed 52-42, and fans briefly began believing in miracles.
But Queens’ Sean Morgan and Catawba redshirt freshman Jeremy McLaughlin were both assessed technical fouls with 14:52 left. Play stopped for a bit to restore order and sort things out. That interruption spurred Queens.
“We’d started the second half flat,” Lundy said. “But the double technical got us riled up. It wasn’t anything that the coaches said. It was our seniors. They decided to pick it up some.”
Three minutes later, Queens led by 18. Then came a wicked 11-0 run, and the lead was 29.
“We had about a five-minute lapse in the first half and then we had a second lapse in the second half,” Perron said. “You can’t afford lapses against a team like Queens. It’s not like we ever played great on offense tonight, and then in the second half we lost confidence.”
Taylor was under-the-weather but still led the Indians with 13 points and nine rebounds.
“You couldn’t tell he was sick in the first half,” Perron said. “But then fatigue started to show.”
McLaughlin fought for 10 points and 10 rebounds. Jerrin Morrison never got it going after opening the game with a 3-pointer. He scored nine. Ben Sealey made two 3-pointers and scored eight.
Catawba shot 36.5 percent for the game and was 7-for-27 on 3-pointers.
Catawba’s defensive gameplan was to make Queens guards Lewis and Marquis Rankin put the ball on the floor, but they still stroked three 3-pointers apiece and scored 24 each.
Lewis made one deep 3-pointer with Catawba guard Rakeen Brown right in his face, and there wasn’t anything Brown could do except shake his head.
Withers added 18 highlight-film points.
Catawba (10-15, 8-11) needs another win to lock up a spot in the SAC tournament. The Indians will try to secure that win at home against Brevard on Saturday.