At your fingertips: Seventh-graders print 3D models for program 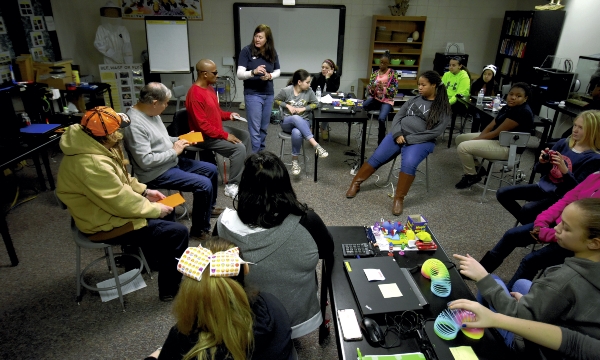 Randy Ewing, Vance Eller and DeWayne Walker, left, came to a workshop to offer their opinions on how best to serve the visually impaired populations with touchable informational placards. A select group of middle school students from the Rowan Salisbury School System attended a special workshop taught by an education specialist from the Pisgah Astronomical Research Institute involving the use of 3-D printers to create hands-on information placards for visually impaired users. Jon C. Lakey/Salisbury Post

How do visually impaired members of the community learn about space? Last week, local middle schoolers were invited to help create tactile tools used in planetarium programs for those with limited sight or visual impairment.

Horizons Unlimited partnered with the Pisgah Astronomical Research Institute (PARI), to hold a camp for 16 seventh-grade girls where they studied 3D modeling and printing.

“At the beginning of the process there were a lot of nerves,” Horizons Unlimited Planetarium Director Neil Pifer said.

But the girls quickly jumped in, eager to learn about programing, printing and space. The camp, which Pifer said was a “holistic” learning experience, also focused on literacy and learning about women inventors throughout history.

The PARI camp is sponsored by the Burroughs Wellcome Fund, and has been held at various museums across the state. Horizons Unlimited opened the opportunity to local middle school girls, and let teachers encourage students to apply. Students came from Knox, Corriher-Lipe, Southeast Middle, North Rowan Middle and Erwin.

Pifer said that the program intentionally chose seventh-graders because that’s when kids really start thinking about their futures and careers.

Christi Whitworth, director of education at PARI, said the program serves another purpose.

“What we’re combating are deficits in spatial visual skills,” she said.

Girls entering STEM fields often have to overcome a spatial barrier involving turning and rearranging items along a visual-spatial axis. It’s a skill children can pick up by playing with Legos or video games.

“Because girls in past years have not been directed towards those areas, they lose confidence in those skills,” Whitworth said.

During the week-long camp, the girls learned how to program designs in Blender, a professional modeling software used by various companies. It’s giving them real world tools and the skills to use them.

“These are skills that are helping them become work ready,” Whitworth said.

Over the course of the week, the girls learned how to use Blender, and experimented with a 3D printer. The camp culminated in a project: printing the surface of the moon or a planet.

Pifer said several of the girls chose craters on the moon, and a group chose to design and print the Curiosity Rover landing site on Mars.

These printed topographical sections will be incorporated into programs designed for those with limited sight.

“When they realize they’re helping people in their community, that’s when they become excited,” Whitworth said.

The second day of the program, the girls talked to the Ramblers, a collection of blind and visually impaired members of the community sponsored by Rowan County Parks and Recreation. Three members of the Ramblers invited questions from the students and studied samples from previous PARI camps. As they dragged their fingers over the landscapes, they gave design tips – space out the letters, make this corner sharper, the labeling text is too small. The girls will also be designing the braille labeling for the pieces.

Vernice Gallon, therapeutic recreation supervisor with Rowan County Parks and Recreation, said the meeting was as important for the Ramblers as it was for the girls.

“They get to give back,” she said, “A lot of times in the community, folks are helping them.”

Whitworth said the meeting was the day the girls truly took ownership of the project.

“People who are blind are never going to get the chance to see the moon or Mars,” Oriana Reed, from North Rowan Middle School, said, “so at least we can give them a way to see,”

Reed said she knows several people with a visual impairment, and hopes that the prints will help them experience a new dimension of planetarium programs.

Nora Ali from Erwin Middle said she loved learning about the codes and commands it takes to work a 3D printer, and is glad she applied for the program.

“I thought it was pretty cool that you could help people by learning,” she said.

She loved learning the codes and commands it takes to work a 3-D printer.

“I’m really glad I got in,” Monserat Salazar, from Corriher-Lipe Middle, said.

Salazar said she’d always considered herself more of a history person, but she was enjoying the camp.

The girls’ designs will be distributed to centers across the state for printing and use in programs.

Pifer said he saw an incredible change and excitement in the group.

“A lot of these girls didn’t have software engineer or using a 3D printer on their radar . . . they’re now well on their way to being able to do that,” Pifer said.