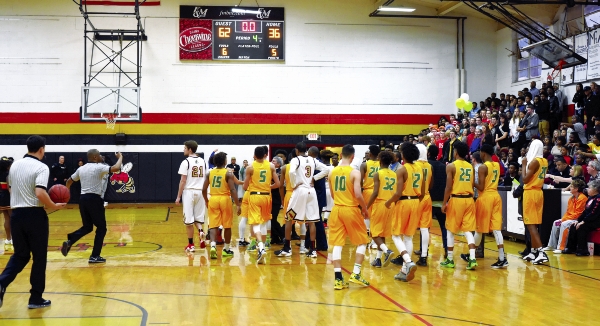 JON C. LAKEY / SALISBURY POST ... A game official moves in just at the start of an altercation between the Salisbury and North Rowan boys basketball teams last Friday. The NCHSAA ruled on Tuesday that neither team will play any more this season.

SALISBURY — As feared, the high school basketball season has ended early for the boys teams at Salisbury and North Rowan.

According to a press release from the Rowan-Salisbury Schools on Tuesday evening, the schools’ principals, Luke Brown at Salisbury, and Dr. Fateama Fulmore at North Rowan, received letters yesterday from the North Carolina High School Athletic Association. The letters addressed violations which occurred in the bench-clearing situation that occurred between the two teams during last Friday’s final regular season game at Salisbury.

The letters, identical except for the individual names of those involved, read:

“The violation is individuals leaving the bench area to participate in a fight (contact or no contact).  Rule 2.6.2 (a)(5). In accordance with NCHSAA Handbook policy, the penalty for this violation is as follows:

The letter concluded with a statement that the schools could appeal to the NCHSAA’s Executive Committee within two working days, though both seemed resigned that the season is over.

With North Rowan leading, 62-36, the third quarter ended and both teams made their way back to their respective benches. Salisbury’s Shaleek Williams reportedly struck North Rowan’s Jalen Sanders in the face, which began the uproar.

The players and coaches from both teams had stood up for the end of the quarter time out, which led to pushing and shoving after Sanders was hit. Some fans almost immediately ran out onto the court, causing the situation to get totally out of control for a few minutes.

The game officials ruled that all players that were off the bench were ejected for fighting, which carries a four-game suspension.

Salisbury athletic director Dale Snyder said that both schools appealed the game officials’ decision that the players left the bench because of fighting. Instead, according to Snyder, the players were off the bench because the quarter had ended and everyone stands up so that the five players on the court can sit down during the timeout.

That argument was denied by state officials Tuesday and the letters were issued.

Both Snyder and North Rowan athletic director Ben Hampton said that the lack of video evidence, showing that the players had risen for the quarter change, hurt the chances for a reversal.

“Our game video stops at the buzzer of the third quarter,” said Snyder, “and several cell phone videos that surfaced were after the fact.”

“It’s just a bad, disappointing situation,” added Snyder. “One of the hardest things I’ve ever had to do in this job was telling the team this news.”

Hampton said that his coaches and team members were also told of the decision on Tuesday.

“It’s a big blow for both schools, as we both had high hopes for making a deep run into the playoffs and possibly winning a state championship,” said Hampton. “It was an unfortunate event that now has us in the situation where two teams have been removed from competition.”

That ruling means a disappointing end of the season for both squads, considering the Hornets and Cavaliers are a combined 38-7 this season and would have most definitely made some noise in the state playoffs.

North (20-2) is ranked No. 2 in the state behind unbeaten East Lincoln. A lot of experts believe the Cavaliers and East Lincoln would have battled for the West Region championship in a few weeks.

North, coached by Andrew Mitchell, would have been the top seed in this week’s CCC Tournament, having won the regular season title with a 10-0 league record.

Salisbury (18-5), finished second in the CCC with a 7-3 mark, with two of the losses coming at the hands of North Rowan. Still, coach Bryan Withers’ Hornets were looking like a team that could have been considered a favorite to also make a strong showing in the state playoffs.

Interestingly, the four-game suspensions for the athletes spans different sports but not school years. That means that a basketball player who also plays baseball, for example, will have to sit out the first four games of the season. But a basketball player, junior or below, who doesn’t play another sport, will not miss any games next season due to the suspension.

A similar incident occurred last Friday night in girls basketball on the eastern side of the state.

Farmville Central’s girls team will not play in the postseason after a ruling by the NCHSAA.

Three Farmville Central players were suspended for their role in a fight with 3:44 left to play in a game against North Pitt.

According to the NCHSAA, three or more suspensions automatically disqualify a team from the postseason. North Pitt had just two players suspended, so the Panthers will play in the postseason, but the two players involved will miss the next four games, two in a conference tournament and two in the state playoffs.

Farmville Central was also fined $1,000 for players leaving the bench and North Pitt coach Neal Carr was placed on a one-year probation for his comments afterwards.