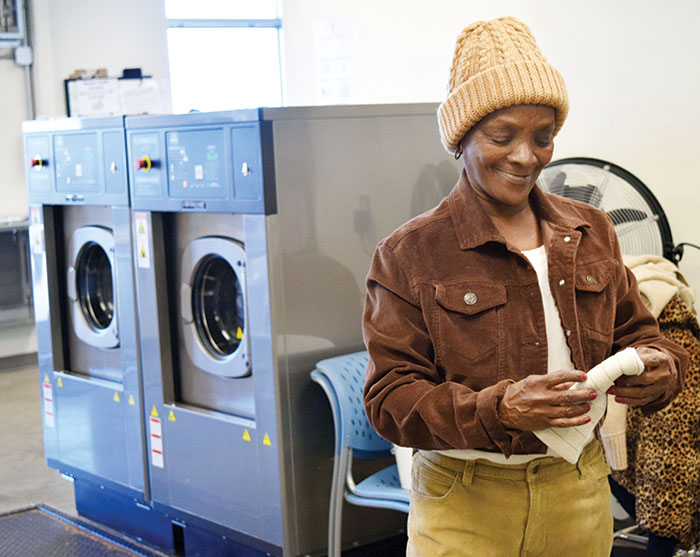 Brenda Blackwell volunteers at Rowan Helping Ministries six days a week. She says knee surgery less than a month ago won't stop her from helping where she's needed. Rebecca Rider

SALISBURY — In the laundry room at Rowan Helping Ministries’ Robertson-Stanback center, Brenda Blackwell keeps everything “working like a top.” Blackwell has been volunteering with the organization for nearly six months, and is there six days a week, doing laundry or helping in the crisis center across the street.

“I love helping people,” she said, when asked why she’s so involved.

Blackwell had knee surgery three weeks ago, but you can’t tell from the way she moves around the room, folding dishcloths, lifting boxes and checking a pile of clean, folded bedding. Resource Development Director Kris Mueller said she was back helping less than a week after her surgery. Blackwell said she stopped working as a caretaker in order to devote more of her time to the organization.

“I wouldn’t trade it for nothing in the world,” she said.

Blackwell is one of the nearly 50 volunteers that Rowan Helping Ministries relies on each day to provide all its services – but more are always needed.

Rowan Helping Ministries relies so heavily on volunteers, Mueller said, in part because it was built by them.

“These are services that were started by volunteers before Rowan Helping Ministries was ever in existence,” Mueller said.

Before its founding, churches and local groups offered similar services, and the organization believes in the power of volunteers so strongly that it built the concept into its mission statement: “To serve through cooperative community action.”

But recently there’s been a shortage of volunteers. After the Robertson-Stanback center opened on Long Street in 2014, RHM got caught up in restructuring and renovations, temporarily losing sight of recruitment. But more space means more hands.

“We have an additional need for volunteers now,” Mueller said.

The shelter has a few needs in both buildings, Mueller said, and it’s hard to find volunteers who meet time and labor needs. While retirees are a great help to the organization during working hours, they’re often lacking in brawn.

“Sometimes they’re not physically able to do some of the work that’s required,” she said.

Food deliveries to the loading dock can have a total weight of more than 400 pounds, Mueller said – and dock workers are one of RHM’s sharpest needs.

“A tiny, little old lady that’s a retiree is just not going to be able to lift that stuff,” she said.

But there are other areas of need, in the Robertson-Stanback center and in the original RHM building.

Interviewers for the crisis center

Volunteers can work one or two hours a week, daily like Blackwell or on an as-needed basis.

“You can always use more,” Mueller said.