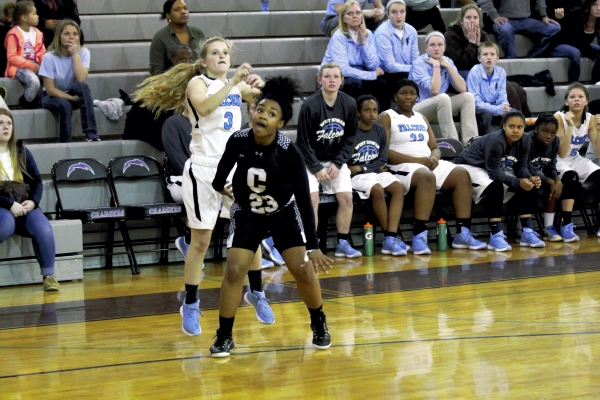 James Sipes/for the Salisbury Post ... West Rowan’s Taylor Martin sinks a 3-point field goal late in the game to lift the Falcons into the lead with 20 seconds remaining against Concord in the SPC Tournament semifinals last night in Concord. With the 49-46 win, West has won 16 consecutive games and faces Hickory Ridge in the tournament final on Friday. Concord Jamya Patton (23) defends.

CONCORD — West Rowan won its 16th straight girls basketball game on Wednesday, but the Falcons had to survive a struggle with fourth-seeded Concord in a semifinal game in the South Piedmont Conference Tournament.
Taylor Martin hit a go-ahead 3-pointer with 20 seconds left that keyed a 49-46 win for the sixth-ranked Falcons. Then the 5-foot senior came out of a crowd with the critical defensive rebound after Concord missed on its last possession. Egypt Alexander, who scored 19 for West (24-2), added a bucket just before the horn.
The teams played in front of a small crowd at neutral Cox Mill and had to manufacture their own energy.
“It was one of those nights,” West coach Ashley Poole said. “Not a lot went right for us. Fortunately, we got some big games off the bench from Shyann Vaughters and Kia Pharr. Shyann made big shots. Kia played good post defense.”
Martin had to sit down for a while after taking a knee to the back of the head and Alexander didn’t score during a first quarter that might’ve been disastrous for the Falcons.
Vaughters, who scored nine of her 10 points in the opening quarter, kept the Falcons in the game.
“She couldn’t miss,” Poole said.
The score was 22-all at halftime.
“We came out of the locker room with a lot of energy to start the third quarter,” Poole said. “We looked sharp and I was feeling good about how we were playing. But then we got in some foul trouble — Khaila Hall (West’s floorleader picked up her fourth) and Concord made a really good run at us.”
Concord got 21 points from post player Jada Black, who has surprising quickness.
“If she catches it down low, you’re in trouble,” Poole said.
Concord took a 46-44 lead in the final minute before Martin’s 3-pointer turned the game.
West Rowan will play ninth-ranked Hickory Ridge for the tournament championship on Friday at Cox Mill.
West has won, 73-62 and 71-69, in two meetings against the Ragin’ Bulls this season.
Hickory Ridge (22-3) jumped to an 18-3 lead after a quarter and beat third-seeded Carson, 61-35, in Wednesday’s other semifinal.