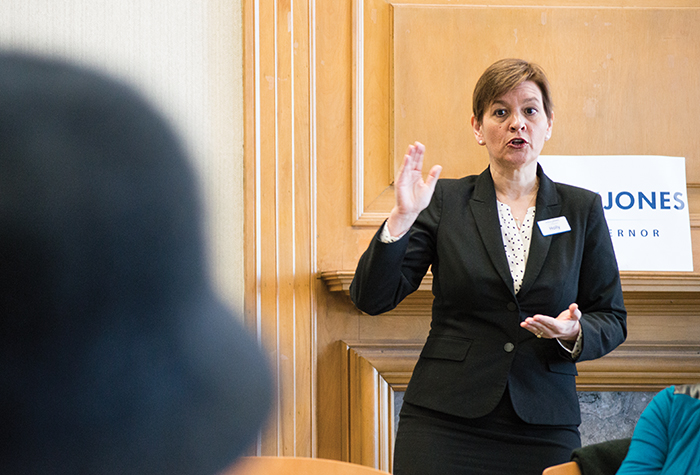 Jones, a Buncombe County Commissioner, spoke to Rowan Senior Democrats during their regularly scheduled meeting. Jones focused on the results of Republican leadership in Raleigh. She specifically cited a takeover of Asheville’s water system and rattled off a number of efforts to reshape local elections.

“I think they’re just doing it because they can,” Jones said. “One Republican legislator stated, and I quote: ‘municipalities and cities are like subdivisions of the state and the state can play with their property if they feel like it.’ Can you believe that arrogance? They’re playing games while we’re trying to govern.”

The water system takeover referenced by Jones started in 2013, when the General Assembly authorized the creation of water and sewer districts voluntarily or “by operation of law.” Asheville met the criteria for a forced transfer. It went through a court battle and was finalized in late 2015.

Although she referenced multiple actions in her home county, Jones said actions by Republicans in Raleigh are having negative effects across North Carolina.

“It is the heavy hand of big government by the party that says they’re about small government,” she said. “It’s hypocrisy.”

She said the Republicans make decisions in Raleigh without the support of local elected officials and local residents.

“Just think of what we could do if the legislature wasn’t against us, if we could work together,” she said. “That’s one of the reasons I want to be lieutenant governor.”

In the March 15 primary elections, Jones will face three other Democrats for the lieutenant governor spot — Linda Coleman, Ron Newton and Robert E. Wilson. After Monday’s speech, one attendee asked specifically how Jones would differentiate herself from Coleman, who previously spoke to the Rowan County Democratic Party. Jones didn’t directly talk about Coleman. Instead, Jones stressed her local government experience as a strength.

“I’ve been able to do a lot of important things in my community,” she said.

“My track record of addressing problems in local communities with the outcomes that are very positive is very important,” Jones said. “I think I’m coming with a fresh approach and a new approach to how we’re going to develop policy and solve problems.”

She added that Buncombe County has attracted additional jobs, supported the public school system and “supported a living wage.”

Following her criticism of the General Assembly, another attendee asked Jones why she chose to run for lieutenant governor instead of the legislature. In response, Jones said the lieutenant governor can be a “bully pulpit” to talk about important issues in the state.

Jones added that she is happy with Buncombe County’s representation in the legislature, which consists of only Democrats in the State House, one Democrat senator and one Republican senator.

Jones is the latest among several Democratic candidates for elected office who have spoken to the local Democratic party.

Jones earned a bachelor’s and master’s degree from the University of North Carolina at Chapel Hill. She also has a master’s of divinity from Duke Univeristy.

She has served as Executive Director of the Young Women’s Christian Association in Asheville and currently works as director of member services for the YWCA USA.