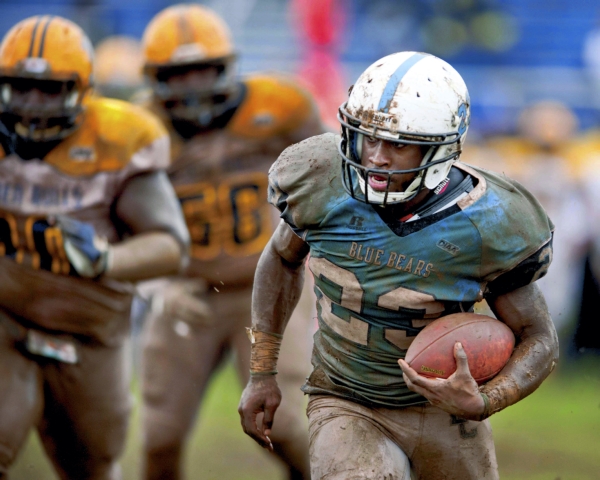 SALISBURY — Livingstone has announced its 2016 recruiting class of new football student athletes — nine high school signees and 13 more which transferred into the college this semester.

The Blue Bears, coached by Daryl Williams, are coming off their first winning season in 17 years, a goal Williams had when he took the job three years ago. He now hopes to build upon last fall’s solid results.

Livingstone was 5-4 in 2015 and actually won two other games that were considered “non-counters” by the NCAA.

Last January’s transfers were important to the success on the field, as those players got adjusted to the college and football program, and were able to go through spring practice. Williams is hoping that this semester’s transfers will be just as successful.

“As a whole, this new group has already bought into the process and we’re excited to see what they’re going to do when practice starts after spring break,” said Williams. “With these young men, we’ve been able to address and improve depth at some positions and that’s very important to the health of a program.”

Williams was hesitant to brag on any particular player, but did say that offensive line transfers Dhani Dye (Miami, Fla.) and Ricky Felix (Lehigh Acres, Fla.) “are some big ole boys.”

Bell and Willis will compete with red-shirt freshman Dallas Burton at quarterback this spring. Burton (6-1, 215), from Louisville, Ky., was on the team but did not play last season, as he was behind two seniors, Drew Powell and Isiah Laster.

Of course, Powell was a multi-year All-CIAA selection and was a standout for Livingstone as a four-year starter. Laster, from West Rowan, was a capable backup.

Powell leaves some big shoes to fill, but Williams is looking forward, not backward.

“Drew was a great player and did some wonderful things for our program, but I think that we’ve got a system in place that will allow someone to be very successful at the position,” said Williams. “We will continue to have an outstanding quarterback at Livingstone.”

Interestingly, among the high school signees, a set a twins — Andrew Faraimo, a running back, and his brother, Anthony, a wide out, will arrive this fall at Livingstone from Overhills High School in Spring Lake, N.C.

Anthony Faraimo had 29 catches last fall for 783 yards (27 yards per catch). Nine of his grabs went for touchdowns. Andrew rushed for 809 yards on 105 carries (7.7 yards per attempt), including seven TDs for the 6-6 Jaguars.

The Faraimos will give the Livingstone football program four sets of twins. Already on the Blue Bears’ rosters are Jarius and Jarod Richardson, Kevin and Kovarious Williams, and Jarmal and Jabrell Anderson.

Jarius Richardson had the most yards (613) among Livingstone’s running backs last fall, while his brother and both Williams brothers were key contributors in the defensive backfield. The Andersons are both defensive linemen and were red-shirted last season.

Williams said that more recruits may be signed in the coming weeks, including another quarterback and tight end who visited last weekend.

TRANSFERS WHO ENROLLED AT LIVINGSTONE IN JANUARY