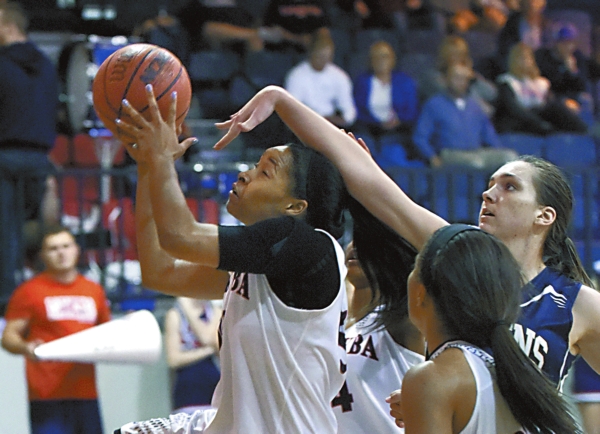 Wayne Hinshaw/for the Salisbury Post ... Catawba’s Alexis Newbold goes to the basket and is fouled by Queens’ Maggie Stewart during Wednesday night’s game at Goodman Gym. The Indians won the game, 73-58, their sixth win in the last seven games.

SALISBURY — There is no longer a big picture for the Catawba women’s basketball team.

With just three South Atlantic Conference games remaining — two of them on the road — the middle-of-the-pack Indians have trained their eyes trained on fourth place and a first-round home game in the upcoming conference tournament. Against that backdrop, they shook off a sluggish first half Wednesday night and surged past visiting Queens, 73-58.

“We all realized the importance of this game,” coach Angie Morton said after Catawba (14-11, 11-8) shot 72 percent from the field in the second half and won for the sixth time in seven games. “And they understand the situation that we’re in. Deep down, they don’t want to lose either. But sometimes they just need extra motivation.”

With sophomore center Terri Rogers watching from the bench and starting guard Serena Brown limited to 11 minutes — both with day-to-day ankle injuries —the Indians looked nothing like the team that leveled Queens (4-20, 2-17) by 34 points in early January.

“They didn’t have anything to lose,” Catawba forward Alexis Newbold said after making her third start. “They were hungry. We couldn’t take them for granted. We still had to prove ourselves.”

Queens was surprisingly competitive in the first half, when it forced 11 Catawba turnovers and got 10 points off the bench from sophomore Sheridan Pressley. “We didn’t play smart,” Morton said. “And (Pressley) had the game of her life. She averages like 10 points a game but had 20 tonight.”

Pressley shot 8-for-14 from the field, sank five 3-pointers and finished with a game-high 23 points. Her long-distance connection with 42 seconds remaining in the first half put Queens ahead, 28-27. Only a last second three by Bri Johnson (20 points, 7 rebounds) moved Catawba in front at the break.

“We were a little shaky,” Catawba’s Jada Huntley said. “Maybe we took them too lightly. Anyway we had to start talking on defense and quit taking those quick shots we were taking in the first half. We had to play with more patience.”

The turnaround came in the third period, when Newbold scored eight points and Catawba knocked down five 3-pointers — two apiece by Johnson and Janna Dixon, and another from senior Zhaquondalee Greer. Johnson’s trey from the top of the key put the Indians in control, 59-46, after three quarters.

“The third quarter’s been a problem all year for us,” said Queens coach Susan Yow. “We were competitive for a while, but that third quarter wiped us out. The bottom line is they are just a better team.”

Catawba hopes to maintain that momentum heading into Saturday afternoon’s home finale against last-place Brevard. Then it will focus on road matches against Lincoln Memorial and Wingate — the two teams standing between the Indians and fourth place — in next week’s home stretch.

“We’ve got the blueprint right in front of us,” Newbold said. “Now we’ve just got to make it happen. We’ll have to play better than this.”

NOTES: Newbold made all six of her field goal attempts and scored 12 points in 11 foul-plagued minutes. Huntley went 7-for-9 from the floor, grabbed eight rebounds and totaled 19 points. … Catawba shot 54.5 percent overall (30-for-55) and had a 36-17 rebounding edge. Another glaring statistic: 38-18, Catawba’s advantage in points-in-the-paint. … Queens has lost 19 of its last 21 games.