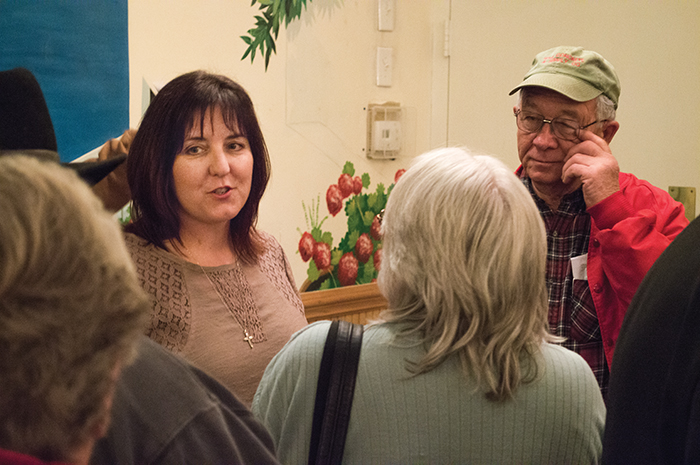 Curran and Foxx — both Republicans — will face each other in the March 15 primary election. The 5th Congressional District extends into the northern and western sections of Rowan County.

Curran lives in Kernersville, is a homeschooling mom, a former social worker and founder of a nonprofit called Shwachman-Diamond America. Foxx took office in 2005, served as a state senator from 1994 to 2004 and previously worked in higher education.

In her speech, Curran specifically focused on a December vote by Foxx to support the nation’s spending package.

By voting for the spending bill, Curran said Foxx supported Planned Parenthood, the Affordable Care Act, a partial bailout of Puerto Rico, Syrian refugees entering the U.S. and a number of other controversial programs.

“The power of the purse is something our House of Representatives fails to use,” Curran said. “If we the people don’t want it funded, they have an obligation not to fund it. It doesn’t matter how benign. It’s supposed to be a government of the people, by the people and for the people. Instead, we have a government of career politicians.”

Curran said the vote in favor of a spending bill still counts as supporting the conversional programs.

“I think the American people are fed up,” Curran said. “I’ve knocked on over 8,600 doors as of today, and the jig is up. You’re out here saying ‘no, no, no, I really fought it,’ but you did fund it. You voted to fund it on Dec. 18 of last year. Then, a few weeks later you have a showboat to dismantle Obamacare and defund Planned Parenthood.”

Curran said Foxx should have voted against the spending bill and against the controversial programs. At the time, Congress had the leverage of a government shutdown, Curran said.

When contacted to defend Foxx’s record in Congress, her campaign provided a statement that said Foxx’s “conservative track record of supporting common sense, conservative solutions speaks for itself.” Foxx’s campaign said she’s “been fighting for North Carolina families and small businesses since day one and nothing will keep (her) from that important task.”

Both Curran and Foxx have spoken to Rowan County Tea Party. Tea Party members on Tuesday said Curran’s visit went much better than Foxx’s. Last month, some Tea Party members walked out of the meeting while Foxx was speaking. One person even tossed a piece of paper at Foxx. Attendee Larry Jones on Tuesday said Foxx appeared to be stalling and “running out the clock” during her visit.  Jones said Foxx initially only took questions from people who lived in the 5th Congressional District.

In addition to criticism of Foxx, Curran spoke about parts of her platform. Curran says she doesn’t believe the government should infringe on second amendment gun rights and government should simply the tax code. She supports repealing the Affordable Care Act, ending common core and not granting amnesty to refugees.

During Tuesday’s speech, Curran also said she would work to abolish the U.S. Department of Education, Internal Revenue Service and the Federal Reserve. She said education should be left up to states and local governments rather than federal authorities. Curran said she also supports implementing the FairTax idea, which would replace all federal income and estate taxes with a national tax on retail sales. The FairTax system would replace the IRS, she said.

If elected, Curran said she would also have regular town hall meetings when Congress isn’t in session.