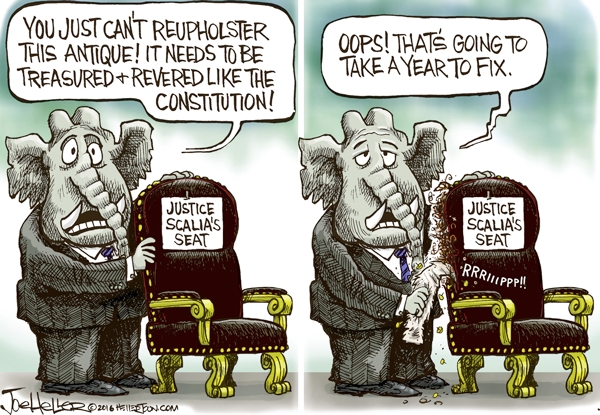 A familiar dictum advises that “politics end at the water’s edge.” We believe a similar protocol should apply when death claims a member of the Supreme Court while he or she yet wears the “robes of justice.”

Politics should be suspended at death’s door. At least until the late justice is properly laid to rest. Alas, such respectfulness has not been accorded Justice Antonin Scalia, who was found dead Saturday of apparent natural causes.

No sooner was news of the 79-year-old jurist’s passing first reported before the first salvos were fired in what almost certainly will be the mother of all election-year battles for his now-vacant seat.

Senate Minority Leader Harry Reed, the Nevada Democrat, demanded that the late Scalia’s seat be filled “right away.” Conversely, Senate Majority Leader Mitch McConnell, the Kentucky Republican, declared that Scalia’s seat on the nation’s highest court should remain unfilled until the next president submits a nominee.

Out of deference to Scalia, we will restrain ourselves this day from joining the speculation among the chattering class about how the post-Scalia “Game of Robes” will play out. For now, our preference is to remember the legacy Justice Scalia leaves. As President Barack Obama graciously eulogized Saturday afternoon, the late justice “dedicated his life to the cornerstone of our democracy: the rule of law.” He truly was, in the president’s words, “one of the towering legal figures of our time.”

Indeed, during his three decades on the Supreme Court, the conservative jurist’s powerful legal arguments transformed America jurisprudence, shaping debate not only on the high court, but also among lower courts and law schools.

Considered somewhat acerbic when he first took his seat on the court, Justice Scalia reportedly became more collegial with fellow justices in the years that followed what was arguably his most significant majority opinion, which affirmed the Second Amendment right of individuals to keep and bear arms.

In the ensuing years, the conservative icon began to write a majority of the high court’s biggest cases, using his formidable powers of legal persuasion to bring less-conservative justices around to his view.

America owes a debt to Antonin Scalia for his extraordinary service to this country. He will be missed.

My Turn: Obama and the GOP