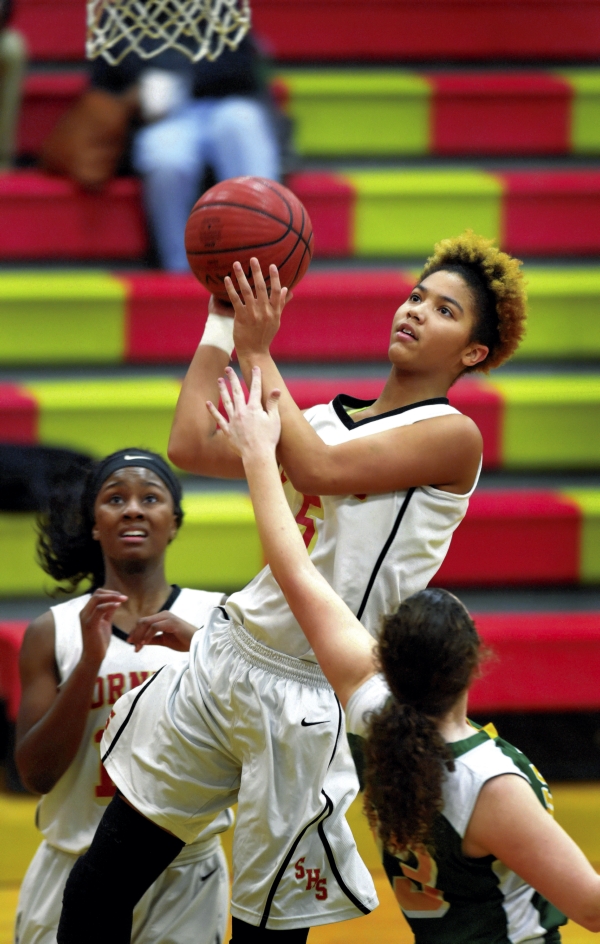 JON C. LAKEY / SALISBURY POST... Salisbury’s Bryanna Troutman (5) goes up for a layup under the basket as West Davidson’s Olivia Sharpe (23) reaches back to defend during Tuesday night’s CCC Tournament first round game at Salisbury. Led by Troutman, the Hornets won the game, 57-38.

SALISBURY — Salisbury’s girls basketball team barely had time to wipe its feet on the post-season welcome mat when it got “punched in the mouth,” according to coach Lakai Brice.

The Hornets unexpectedly fell behind in their Central Carolina Conference tournament opener against visiting West Davidson on Tuesday, then regained focus and charged back for a convincing 57-38 victory.

“We had to wake up,” Brice said after Salisbury (14-10) advanced to Thursday night’s semifinal against North Rowan. “That’s all it was. We weren’t in the flow on offense or defense.”

They got in the flow over the last three quarters, when they outscored West by 26 and limited the Green Dragons to nine field goals.

“In the first quarter, we were able to move the ball, break their press and start our offense,” West coach Jamie Motsinger said after the guests closed the season winless in 24 games. “In the second, (Bryanna) Troutman and (Tyzarea) Alexander started to have their way with us. They were able to penetrate and we stopped moving our feet on defense.”

West made layups, short-range set shots and got 3-pointers from Mikayla Sink, Jenna Burkhart and Olivia Sharpe to build a 17-10 first-quarter lead.

“We underestimated them,” Troutman said after contributing 18 points, nine rebounds, three blocks and four steals. “Then coach (Brice) reminded us that this is our game. This is a team we had beaten twice already.”

It must have been the phrase-that-pays because Salisbury responded by playing house music the rest of the night. Troutman drove for successive layups early in the second period and Alexander gave the Hornets their first lead, 21-19, when she rebounded a missed free throw and hit a put-back midway through the quarter.

“That play was a turning point,” Alexander said after netting 12 of her 14 points in the first half. “It made all of us feel excited. We knew they weren’t coming back after that.”

Salisbury fell behind late in the half, but surged ahead for good when sophomore Maria Capito drained one her four 3-balls with 38 seconds remaining in the half. The third quarter opened with 3-pointers by Troutman and two in a row by Capito, providing a 39-26 lead.

“We may have been overconfident in the first (quarter),” Capito said. “But we were much more motivated in the second. We adjusted and worked as a team instead of individuals.”

Brice praised the work of Salisbury’s scrappy defense, which forced 29 turnovers. “Defense really won the game for us,” she said. “We got after them a little more. We started rushing the passing lanes and getting some easy, fastbreak buckets in transition.”

“This is one of the first times she’s played a complete game from start to finish,” Brice said. “She didn’t take many plays off. Usually, she takes a couple plays off, but tonight I saw a different look in her eyes.”

Next up is Thursday’s 6:00 p.m. semifinal at Lexington High School, where the second-seeded Cavaliers (16-6) will seek their third win against Salisbury.

“We’re ready for the next one,” Alexander insisted. “We know what we’re looking for.”

Brice thinks the key will be containing senior Aliyah Farmer, a 5-9 forward and strong candidate for the county player-of-the-year award.

“We are peaking at the right time,” Brice said. “But we’ve got to box out. We’ve got to keep Aliyah Farmer off the boards. That’s the game plan.”

NOTES: This was Brice’s first post-season game. Salisbury missed the tournament in 2014, her first year at the helm, and last year’s tourney was snowed-out. … SHS played without injured starter Tacorra Robinson, who was hurt last Friday against North Rowan. … Salisbury lost twice to North this season, falling 54-29 and 58-48. … Motsinger is a former standout player for Ledford High School.