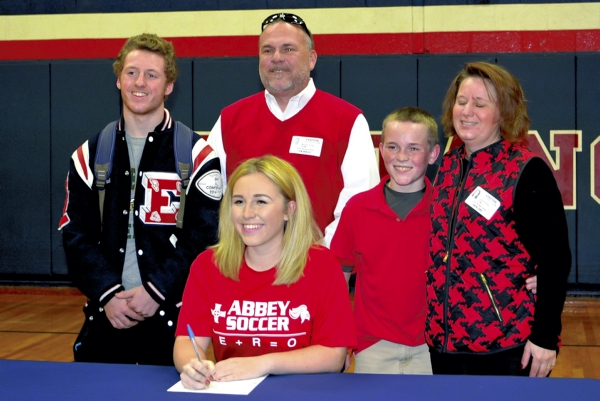 GRANITE QUARRY — The nine goals that center midfielder Kelby Porter has scored for East Rowan’s girls soccer the past two seasons are hazy memories, but she can vividly recall a goal she helped a teammate score.
Erin Hatley was a senior defender and had never scored for East, but then Porter assisted on Hatley’s goal last spring against North Rowan.
“My mom takes about 500 pictures every game, and that one is my favorite,” Porter said. “I’ve never seen anyone look as happy as Erin did.”
Obviously, Porter enjoys making teammates shine.
She’s been outstanding for the Mustangs in a center-mid role that is equal parts offense and defense. East, 8-29-1 the last two seasons, hasn’t scored frequently, but Porter still has registered 16 assists.
Porter will have a chance to make Belmont Abbey teammates happy next fall. She signed recently with the Division II Crusaders, who are located 10 miles west of Charlotte.
Belmont Abbey has been a powerhouse in Conference Carolinas under coach Mike Lynch. Porter can recite all the stats.
“They were 11-0 in Conference Carolinas in the regular season and they scored 59 goals, while allowing eight,” Porter said. “It’s a great program. I’ll have a lot to live up to.”
Porter’s parents have their roots in Maryland and Virginia, which explains why her favorite teams are the Baltimore Orioles and Virginia Cavaliers.
She’s not sure why her parents chose Rowan County as the right place to raise a family, but East Rowan supporters are glad they did. Kelby’s younger brother, Wesley, is a two-time all-county DB for East Rowan football as well as a 132-pound state qualifier in wrestling.
“I’m older, but more people know Wesley because of football,” Kelby said with a laugh. “I don’t mind. I’m really proud he’s my brother.”
She started playing soccer early — as far back as she can remember.
“I played in the rec leagues, and then I started with club soccer in seventh grade when I was at Erwin Middle School,” she said. “I’ve stayed with it and I play for the Charlotte Soccer Academy.”
While East usually has struggled in the South Piedmont Conference, Porter has managed to stand out. She’s been All-Rowan County twice and All-SPC twice. She was all-region as a junior. She also was voted team MVP by teammates the last two seasons.
“Being all-region meant a lot and being voted MVP by my teammates meant a lot,” Porter said.
She got her opportunity with Belmont Abbey mostly by what she did in camps.
She made a good first impression at the Crusaders’ camp in January of her junior year.
A Belmont Abbey coach also saw her at Catawba’s camp last summer.
“I think I played better that day at Catawba than I’d ever played in my life, and a Belmont Abbey coach happened to be there,” Porter said.
That camp performance led to email contacts and an invitation to visit the Belmont Abbey campus. Porter was offered the same day she visited.
She was recruitable because she’s a good student. She makes A’s and B’s in her AP classes. She plans to major in biology with the goal of a career in the medical field.
Speaking of goals, she believes there will be more of them for East soccer this spring under new coach Stephen Kidd. She’s been attending voluntary conditioning workouts for three weeks. The weather-delayed first official day of practice is scheduled for today.
“We’re very optimistic,” Porter said. “We want to make a new name for East soccer.”