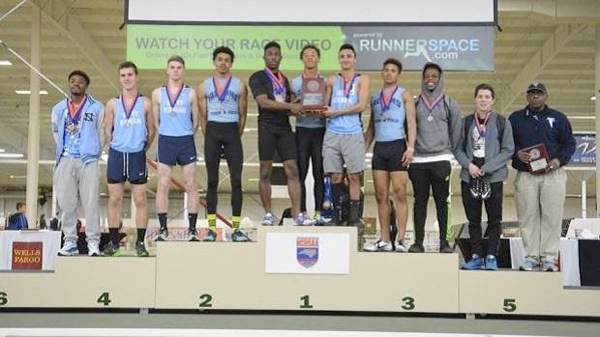 West Rowan's J.T. Sanders, center in all black, poses with the trophy after West finished second in the 3A Championships.

MOUNT ULLA — West Rowan owns 3A state titles in football, boys basketball and softball and wasn’t far from adding indoor track and field to the list on Friday.
The Falcons, a small collection of runners, hurdlers and jumpers coached by Ralph Ellis, accumulated 51 points and edged Marvin Ridge for second place in the 3A Championships at the JDL Fast Track in Winston-Salem.
Champion Weddington got 49 of its 58 points in the distance events — the 1000, 1600, 3200 and 4×800 relay. West countered with 39 points in sprints, eight in hurdles (Juwan Houston was second) and four in the jumps from Joel Thomas-Morales, who had two seventh-place finishes.
Senior Jaylon “J.T.” Sanders, who won two events and had a hand (and two legs) in 28 of West’s points, figures the difference between Weddington and West on the scoreboard was his own false start in the finals of the 55-meter dash.
“Going into the meet we all knew we had a shot to win if we ran our best in every event,” Sanders said. “That false start probably made the difference.”
Going into the meet, Sanders had posted the third-fastest seed time in the 55, but he said there was a mixup and he was initially placed in the slower heat.
“Then some guys didn’t show up and they moved me to the fast heat,” Sanders said. “But I was a little mad.”
Sanders has run the 55 as swiftly as 6.34 seconds. His 6.54 clocking in the prelim was the second-best time and moved him into the final. If he’d just repeated that 6.54 in the final, it would’ve been good enough for third place and six points, but the false start eliminated him.
Teammate Javon Quarles did finish fourth in the event for five West Rowan points, and Quarles also helped the Falcons pick up six points with a third place in the 4×200 relay.
Sanders would redeem himself as the day unfolded.
He was only the seventh seed for the 500 meters, but he ran the race of his life. His time of 1:05.84 broke the 3A state record. It also was a time that would’ve won the 4A and 1A/2A state meets that were conducted on Saturday, so he can say he’s the best in the state in the 500.
He did everything right in that race, but he didn’t have a lot of time to enjoy his feat. After a few high-fives and deep breaths, it was time to line up for the 300.
“There were only 15, maybe 20 minutes between those two races,” Sanders said. “I had to hurry up.”
Seeded third in the 300, he won that race, as well. His time was 35.40 seconds, one-hundreth of a second slower than his seed time. He said he caught a cramp at the end of the 300. That cramp no doubt cost him a personal best.
He deserved a rest, but his afternoon still wasn’t done. The closing event was the 4×400 relay. After fast efforts by Kortez Weeks, Houston and Thomas-Morales, Sanders took the baton for the anchor leg. West finished second in 3:33.14, a second behind winner White Oak and two seconds ahead of fourth-place Weddington.
“I never thought that something like this would happen, but before all of my races I pray to God to lay his hands on me before I run,” Sanders said. “I had some great races today and my teammates ran great races.”
Sanders isn’t big (5-foot-9, 165 pounds), but he’s Rowan’s fastest on the track. In the outdoor season this spring, he’ll be looking to defend the county sprints sweep he achieved as a junior. He won titles in the 100, 200 and 400.
Sanders is uncertain about his future because he also was an all-county cornerback in football where his extraordinary wheels come in handy. His dream scenario would be to sign with a college where he can compete in football as well as track.
Sanders recently had a chance to play in an all-star game for talented, unsigned seniors in Florida. He played both ways as a receiver and defensive back and had a 45-yard touchdown catch.
“But they called that touchdown back because of celebrating,” Sanders said.
In Winston-Salem on Friday, Sanders had a chance for two celebrations that no one called back.