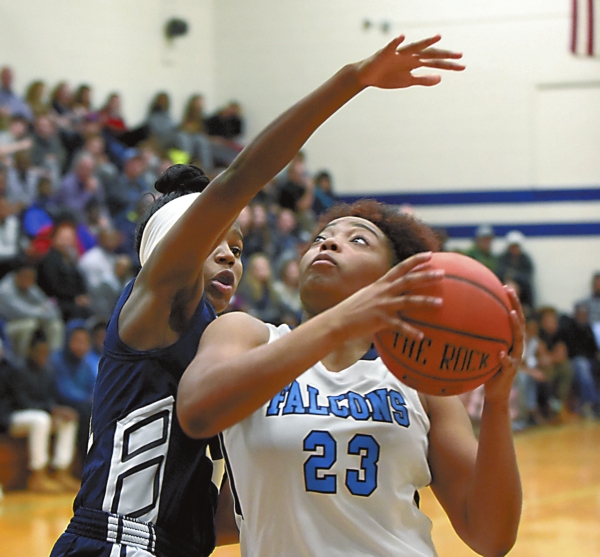 MOUNT ULLA — Taylor Martin was sick. Khaila Hall was off. Shanice Miller was quiet.
But sophomore Egypt Alexander picked the perfect night to score her career high for West Rowan.

The lefty post player poured in 29 points and grabbed nine rebounds to lead the Falcons past Cox Mill, 69-55, in Tuesday’s first round of the South Piedmont Conference tournament.
An under-the-weather Martin somehow managed 22 points. She had three 3-pointers and two 3-point plays.
“I felt pretty bad all day, but once the game got going I felt better,” Martin said. “I got tired quicker than usual. Other than that, it was like a normal game.”
It was a tougher game than it sounds. Top-seeded and sixth-ranked West (23-2) jumped all over the eighth-seeded Chargers early and led 29-10 in the middle of the second quarter. After that, the Falcons were just trying to stagger to the finish line.
“I was very proud that our girls didn’t just say, ‘Well, this is it,'” Cox Mill coach Moses Smith said. “We got down big, but instead of quitting, that’s when we started competing. We’re a young team, but we showed we can create some excitement next season.”
Cox Mill (7-18) outscored the Falcons, 14-3, to close the first half, mostly on inside buckets by Christa Hill.
Then the Chargers kept their surge going at the start of the second half.
When Shamiya Surratt roared down the lane for a three-point play, Cox Mill had outscored West, 19-3, over a six-minute span and the Falcons’ imposing lead had been sliced to 32-29.
“We got that nice lead, but then we had a stretch of laziness,” West coach Ashley Poole said. “Stop boxing out and stop getting back on defense and a team will make a run at you.”
Martin made a 3-pointer to stop Cox Mill’s surge. West pushed back ahead by 13 points after back-to-back buckets by Alexander, but then the Chargers charged again.
“West has a good team and they made some very big shots,” Smith said. “But then Hall got her fourth foul (late in the third quarter) and had to sit down, and we knew we had a chance. We went with four guards. We picked up the intensity and the pressure.”
When Madison Rinkus nailed a long 3-pointer with 7:10 remaining, Cox Mill was only down 49-44.
West freshman Mary Sobataka came through. She scored the game’s next five points, a clutch 3-pointer and then a tough, contested shot in the lane for a 54-44 lead.
Martin took over for the next three minutes, weaving through waves of backcourt pressure and either taking the ball to the rim or dishing to Alexander.
“They put in a bunch of guards and we knew that we had mismatches down low,” Martin said. “And if you can just get the ball to Egypt, you expect it to be points every time.”
Martin’s feed to Alexander for a huge and-one and a 59-47 lead with 4:46 remaining was the backbreaker for Cox Mill. An exhausted Martin collapsed on the bench at that point, and like a relay sprinter, she handed the baton off to Hall. Hall, who had six assists, returned to the floor to run things, and the Falcons started pounding away at the clock with their delay game.
Martin returned late and her two free throws with 1:02 left gave the Falcons a 10-point lead and iced the game.
“Taylor made a lot of hustle plays,” Poole said. “Just typical Taylor Martin plays.”
West plays again tonight. The Falcons are in a 6 p.m. semifinal against No. 4 seed Concord, a 48-40 winner over No.5 seed Central Cabarrus. The game will be played at Cox Mill and will precede the second semifinal between No. 2 Hickory Ridge and No. 3 Carson.