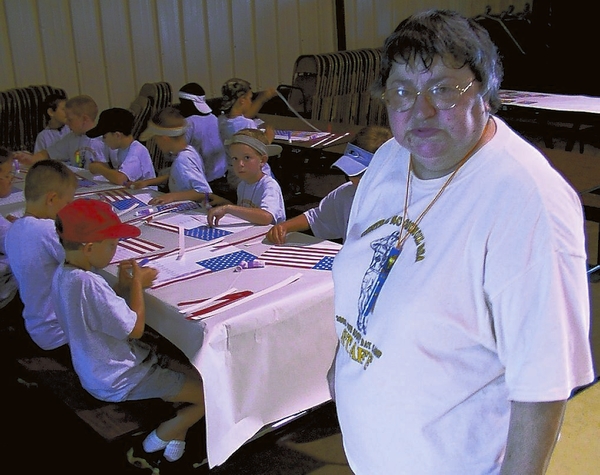 In the world of Cub Scouts, so many things such as Blue and Gold banquets, summer day camps, Webelo camporees and Pinewood Derby races had her “touch of perfection,” Roof said in his eulogy for Overcash Sunday.

“Each week,” Roof said, “when she promised to do her best, to do her duty to God and country, to obey the Scout law and help other people at all times, she took it very seriously.”

Overcash’s death last Thursday at the age of 74 left a big hole in local Scouting hearts. She loved the kids she worked with over 33 years, and they loved her back.

Alice’s superhero name easily could have been “Miss Craft.” She gained a reputation at the pack, district and Central North Carolina Council levels for her enthusiasm for making crafts and doing it right.

“She always had the packs running at full-speed ahead with some of the best programming and fun you could have,” Roof said.

Her kitchen table was often full of markers, glue, beads, flannel and feathers.

“Then, too,” Roof said, “there was the craft closet and the craft garage stacked full of stuff.”

Overcash could never throw anything away because it might be useful on the next project.

Fellow Scouting leaders said Overcash could be a no-nonsense stickler for detail. She made sure boys — and their leaders — followed the Scouting way of doing things.

She preached flag etiquette and Roof said Overcash was very much a uniform cop.

“She was the authority on rules and regulations,” said Alice’s daughter, Stacey Cannon. “If you had any kind of question in that regard, you called mom and asked.”

Overcash couldn’t hide her big heart, however. She would never allow a boy to go without a uniform. She scoured thrift stores all the time for donated shirts, and if she didn’t have the right size for a needy kid, she bought one herself. It didn’t matter if the boy was in her pack or not.

Marny Hendrick, long involved with Scouting on the district and council levels, said Overcash was one of those Scout volunteer leaders who had an impact on several generations of boys and their families.

Name a Cub Scout event, and Overcash was involved in it, or running it, Hendrick said.

Cannon said her mother started in Cub Scouts when her brother, Jay, heard about Scouting in school and came home enthused about it. Alice then helped to create Pack 316 at Wittenberg Lutheran in Granite Quarry, starting out as a den leader.

Alice eventually took over as Cubmaster for the pack, which moved to Shiloh United Methodist, also in Granite Quarry. After Jay aged out of Cub Scouts, Alice stayed with the program and became even more deeply involved.

“She loved it,” Cannon said. “She started out real heavy in doing crafts as a den leader.”

Overcash was soon being invited to Scout pow-wows to teach crafts and was making a lot of friends. Hendrick said Overcash became known to all the leaders and professional Scouting staff in the district as a go-to person.

Because numbers dwindled, Pack 316 had to drop its charter in 2001. Alice swore to her family she was going to retire, but within a few months she was assisting Roof’s Pack 443 at St. John’s Lutheran in Salisbury.

Roof said Overcash loved animals and camping outdoors. When her knees started to hurt and made sleeping on the ground difficult, Overcash simply bought a thicker air mattress to lift herself higher off the ground.

When her aching knees made it too difficult to walk all the acreage at Camp Barnhardt, she rented a golf cart to get around.

“For her, there was nothing like the campfires and the great hobo meals,” Roof said.

Christopher Crowell said his sons Justin and Cameron owe their Eagle ranks in Boy Scouting to Alice Overcash. “She was the catalyst for them being in Scouts,” he said. “She told us Justin was starting, and we didn’t argue.”

Overcash was Justin Crowell’s Cubmaster at Pack 316, and he went to Troop 443 the same time Cameron started Cub Scouts there with Alice as an assistant leader.

“My mom was large and in charge,” Cannon said, describing how strong and independent Alice was before a devastating stroke Feb. 22, 2012.

The stroke and the limits it put on Overcash physically spelled the end to her Cub Scout duties. She ended up the last years of her life in Autumn Care. When he visited Overcash at the nursing home, Roof said, the conversation always turned to Scouting.

Roof has been involved as a Scout leader for 40-plus years, and he thinks he knows what drove Overcash’s passion for it.

“Some of us don’t give up easily,” he said. “It’s just that we care so much for the kids.”

Roof said Alice also was a superhero as a wife and mom. Before retirement, she worked as a pharmacy technician at the VA Medical Center. In Scouting, she received the Wood Badge and the Silver Beaver Award for her leadership.

Roof said his pack and the Scout district as a whole immediately felt a big hole when Alice suffered that stroke in 2012. He isn’t sure they’ve recovered yet.

District executives have been calling Cannon since her mother’s death, expressing the same kind of sentiment.

“I feel like she made a difference,” Stacey said.