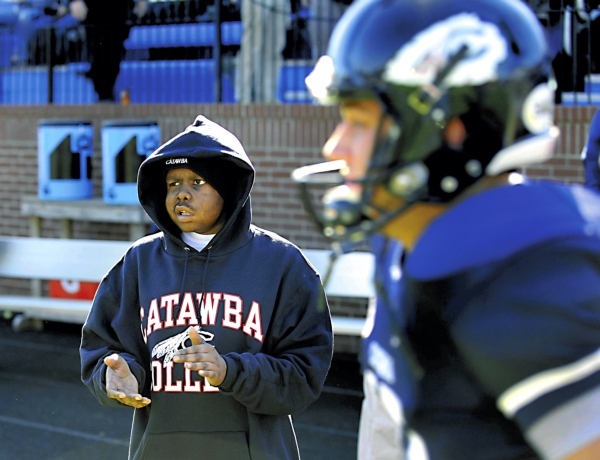 Robert Stephen Gilmore got to spend a week in 2015 as an honorary football coach at Catawba College. The Salisbury High School student lost his battle with cancer on Sunday. File photo by Wayne Hinshaw/For the Salisbury Post

By Shavonne Walker and Rebecca Rider

Robert Stephen Gilmore was a huge Carolina Panthers fan, and he truly lived by the teams’ inspirational motto, “Keep Pounding.” Stephen, 19, died Sunday after a nearly lifelong battle with cancer.

The beloved teen died with his parents Wendy Gilmore Baskins and Travis Hairston by his side at a Hospice facility.

Like the Charlotte football team, Stephen defied the odds and went on to impact others through the courageous life he led. He first faced with cancer at the age of 3 when doctors discovered a brain tumor. Stephen fought colon cancer when he was 15, but the cancer returned in May 2015.

Stephen made his mark on the world and had some great opportunities to touch lives along the way.

He was named Prom King at Salisbury High in 2015, awarded the first ever Courage Award by the Rowan-Salisbury Board of Education, and on Feb. 11 he became Salisbury High’s first 2016 graduate.

A special ceremony was held Thursday at Brenner Children’s Hospital to award Gilmore his diploma. The ceremony was attended by over 100 friends and family members.

“He had a purpose on this earth,” Baskins said.

She said her son’s story is so big and his inspiration so far-reaching that it goes beyond Salisbury and Rowan County. Stephen has encouraged people in Puerto Rico and London who’ve heard about his triumphs and setbacks during his journey, his mother said.

A Facebook page “Do It Again — Robert Stephen Gilmore’s Journey,” which was created to chronicle Gilmore’s experiences, has been flooded with celebrations of Stephen’s life and words of comfort to his family.

“You were a fighter, and inspiration to so many,” Susan Hall Cuthbertson wrote. “You have your Angel Wings now, and there will be no more hurting.”

“Rest in peace special angel — God needed your superpowers,” Denise Allen, a former Rowan-Salisbury teacher said. “You will surely be missed at school. We are praying for the family. May God bless all the special people who loved and supported him on his Journey.”

Another friend, Jill McCartney Wagoner wrote — “What is so beautiful to me is that my whole feed is filled with memories of Stephen. He knew everyone! A testament to how many lives he touched.”

The family knew Stephen’s final days were near and he knew it too, Baskins said.

On Dec. 27, Stephen was close to death, but God pulled him through, his mother said.

Stephen was unresponsive for about four days, and doctors gave him hours, then minutes, to live.

“They said he wouldn’t make it through next week and he came out of the hospital not being able to walk. Within four days, he was walking,” she said.

The family talked much about death and how Stephen wasn’t ready to leave those he loved behind just yet. The last conversation the family had about the possibility of death was before a Charlotte Hornets game in early February, Baskins said.

He was also so excited to watch his favorite team play the Denver Broncos in the Super Bowl. He was sad that they lost, but a superfan nonetheless. One of his final wishes was to meet the entire Carolina Panthers team.

She’d asked Stephen if he was ready to keep fighting and he was, but that all changed this week, Baskins said.

Stephen talked about being very tired, and his family encouraged him to rest.

“We told him it was OK for him to rest,” she said.

“He was worried about cancer beating him but we told him, cancer didn’t beat you. The way you lived your life, you beat cancer,” Hairston said.

During one of his final conversations with his parents, Stephen kept repeating 630, but the family didn’t really know what he meant. He told them on Saturday he knew he was dying. He ate a meal of mashed potatoes and gravy, which was remarkable because he hadn’t had much of an appetite in months.

“They were actually good days,” his father said.

He seemed to rebound. He was talkative and even made a Valentine’s Day card for his mother on Sunday.

“He painted two hearts and wrote ‘I love you,’ ” Hairston said.

Baskins said after quite some time in the room with Stephen, she left to go home and check on her daughter, Sydney. Hairston stayed with his son while Baskins quickly drove home.

Baskins received a call telling her to return and that the end was near. She’d just exited the highway at 6:25 p.m. and by 6:30 p.m. Stephen was dying.

“Because of his strength and determination, you kind of get this sense that it’s not going to happen,” Hairston said of his son’s final days.

“You want to believe that with his strength and what he’s gone through, he’s going to pull through,” he said.

“He gave it all he had, all the way to the end,” Hairston said.

Stephen had a wish granted by the Make A Wish Foundation when he was 3 years old and you only get one, his mother said.

When Stephen lived beyond doctors’ expectations, the family assumed he’d never get another wish fulfilled. His final two wishes were to graduate and meet the Carolina Panthers team.

Plans were in the works for a graduation ceremony including a call to Herff Jones, an Indianapolis based company that specializes in graduation accessories. The company was able to outfit Stephen with a cap and gown in Salisbury’s colors. A graduation ceremony was organized within 24 hours.

Stephen died one day shy of meeting Panthers tight end Greg Olsen. Through word-of-mouth that relayed Stephen’s story to a foundation, he would’ve been able to meet the popular player.

In his final days, Baskins said she thought about how she would honor her son’s legacy.

“The only thing I could promise is I would continue everything we started,” Baskins said.

Stephen had begun to save money — including what he’d received at his recent graduation — for gas cards. Stephen was working with Sisters Inspiring Sisters Inc., a North Carolina nonprofit that provides transportation assistance to cancer patients in financial distress. The organization provides gas cards to families for medical appointments and chemotherapy treatments.

Stephen showed people that “they can still fight and work through it all in a positive manner,” Hairston said.

Stephen was a motivational leader and an inspiration to a lot of young people, he said.

He said Stephen’s greatest dreams were to get an education and become a football manager. He did both.

“He still wanted to be out there,” Hairston said.

Hairston said even while in the hospital during his last days, Stephen was trying to get homework and his senior project done.

“He was one of the strongest people I’ve ever known,” Hairston said.

His mother said she’ll remember “that invincible spirit” Stephen had.

“It was an awesome privilege to be his mom,” Baskins said.