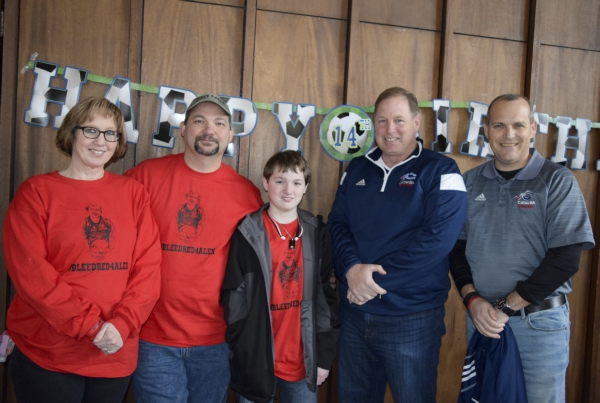 SALISBURY — Alex Yates’ birthday celebration was a success. The teen surprised his mother, Leanne Yates, a few weeks ago by asking for a blood drive instead of presents for his 14th birthday.

And despite canceled schools and the threat of winter weather, the drive, hosted by the Catawba men’s soccer team and the Community Blood Center, attracted somewhere between 35 and 50 donors, Donor Recruiter Lori Haas said. The drive was held in the Crystal-Peeler Lounge at Catawba College.

Yates is grateful that it turned out so well; she, Alex, and the team were worried no one would come.

“Not with the weather and everything,” she said.

Haas agreed that the turnout would have been better if a winter storm wasn’t expected to blow in. But it was still good. She said that the Community Blood Center has a minimum collection requirement of 15 units.

The Community Blood Center became involved when Alex’s request was posted to Facebook, and Haas said they’re happy to be here.

“This was Alex’s wish, and that’s fantastic,” she said.

Alex is an honorary member of the Catawba Men’s Soccer team, and the players spent the days before the drive canvassing the area and promoting the event. On Monday, those who were able to donated, and Alex opened gifts and blew out the candles on a cake – with a little help from his dad, Jerry Yates.

Alex, who lives with primary ciliary dyskinesia and an immunodeficiency, relies on medicine made from plasma and donated blood products to stay healthy. He was made an honorary member of the Catawba men’s soccer team at the beginning of last season, and the team considers him their No. 1 fan.

And despite bad-weather worries, a line of people sat quietly in chairs, chatting as they waiting for their turn to donate.

Marianna Swaim read about the drive in the Post, and said she lives to give blood when she can.

Catawba College student Lauren Stacks says she likes to volunteer and give back, but her schedule is often tangled up in theater events.

“I’ve been meaning to do something like this for a while,” she said.

Monday was her first time giving blood, and Stacks said she was nervous, but looking forward to it.

“It seems like a great way to give back,” she said.

Jerry said that Alex has already asked for a blood drive for his next birthday. And while it’s possible he may change his mind, Jerry says they plan on being back in Crystal Peeler Lounge next year.