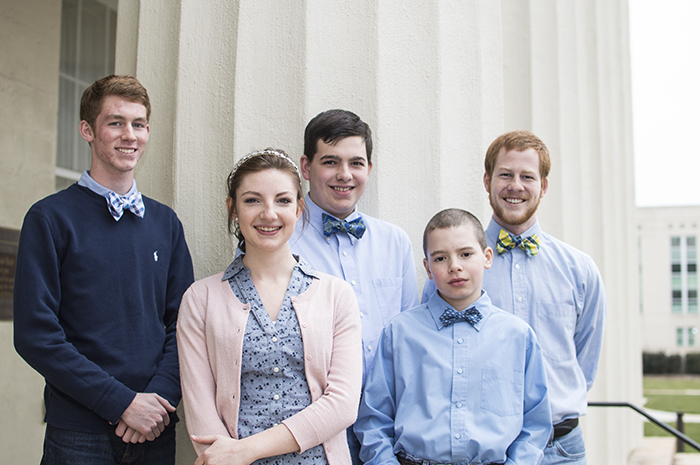 Josh Bergeron / Salisbury Post - The Back Creek Bluegrass Boys are one of the few youth bands in Rowan County. Back row from left: Daniel Thrailkill, John Lee and Will Thrailkill. Front row from left: Tori Jones and James Lee.

With some success in music competitions and an upcoming CD release, the Back Creek Bluegrass Boys hope to infuse some youth into the local music scene. The band has an average age of 16, and its oldest member is 20.

“There’s some other young bands around — some of us are actually also in other bands — but it’s not common to see young people playing bluegrass,” said Daniel Thrailkill, the band’s 18-year-old guitar player.

Will Thrailkill, who plays the upright bass and is Daniel’s brother, said it’s more common to see people playing bluegrass music where the genre has its roots — in Appalachia.

The young band will release its second CD at a 7 p.m. concert Thursday in the Messinger Room of Rowan Museum. The CD is called “Oft I Sing.”The band characterizes its genre as “gospel bluegrass.”

The Back Creek Bluegrass Boys got its start during the Union Grove Fiddler’s Convention in 2014. Daniel Thrailkill, Will Thrailkill and 14-yeard-old banjo player John Lee all initially attended the fiddler’s convention with plans to play individually. With only two bands entered, however, the trio decided to join forces.

They weren’t strangers. The Thrailkill brothers attended Back Creek Presbyterian Church with Lee. All three also live near Back Creek, and the name Back Creek Bluegrass Boys seemed appropriate.

“We knew we’d win something,” Daniel Thrailkill said. “There was a first, second and third place.”

They placed second in the competition and won $10 — a prize the trio jokes was hard to split.

In September 2015, the band entered Downtown Salisbury Inc.’s Buskers Bash. By that time, 17-year-old Tori Jones, who plays the fiddle, had joined the band. Suddenly, they weren’t just the Back Creek Bluegrass Boys, and the band says it may need to make a name change or small tweak to make its name gender appropriate. While practicing on Sunday afternoon, the band tossed around whether to change “boys” to band or make their name “Tori Jones and the Back Creek Bluegrass Boys.”

Jones’ addition seemed to be an important one, as the band beat a number of others in the 2015 Busker’s Bash. The band took home first place.

In addition to winning and placing in competitions as a band, the Back Creek Bluegrass Boys have placed or won a number of competitions individually.

Daniel Thrailkill said the band recorded its latest album in a basement studio that they call “Back Creek Bluegrass Studios.”

On Thursday, the band hopes to make some new fans and thank those who have helped members get to its current point, Will Thrailkill said. They’ve played at various events before, but Thursday’s is the first that they’ve planned independently.

“The concert is really for us to give back to the fans and people who have really supported us,” he said. “They’ve supported us through this time of us becoming a band. And, I feel like we’ve really grown since our first album and especially since Tori joined us.”

Yesterday: AME Zion Board of Bishops