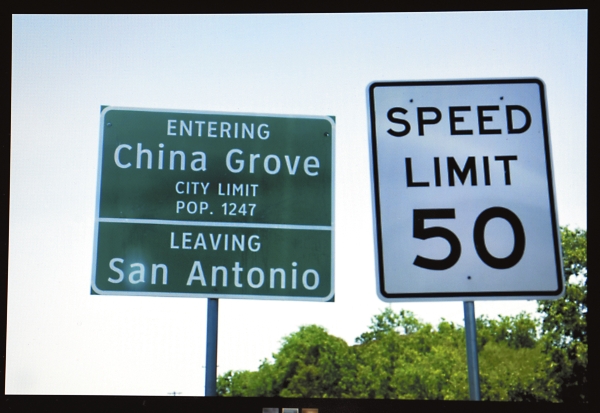 A traffic sign at the entrance of China Grove, TX when leaving San Antonio.

With the guitars playing, the words were:

“When the sun comes upon a sleepy little town

Down around San Antone

And the folks are risin’ for another day

Round about their homes

The people of the town are strange

And they’re proud of where they came

As I am always curious about important facts, I had to know more about this song.

Doing some research, I found that disc jockey Carl Wiser in Hartford, Conn., has a website called Songfacts and he interviewed songwriter, guitar player, singer and Doobie Brothers band member Tom Johnson in 2009 about the China Grove song.

In the interview, Johnson explained that he had written the music first and was trying to come up with words for the song. He thought that he was making up a crazy, fantasy song about a fictional town in 1973 and China Grove popped into his mind. He found out in 1975 from a taxi driver in Houston, Tex., that there really was a town named China Grove ten miles east of San Antonio. Johnson thought that he was just making up words about a crazy sheriff who had a samurai sword and the word sword suggested a Chinese connection. Thus China Grove was the place.

The cab driver told him that China Grove was a real place and that there was a China Grove in North Carolina, also.

More of the song lyrics:

“Well, the preacher and the teacher

They are the talk of the town

When the gossip gets to flyin’

And they ain’t lyin’

When the sun goes fallin’ down

They say that the father’s insane

And dear Missus Perkins a game

In July, 2014, ABC TV station KSAT 12 in Texas reported that the China Grove, Tex., police chief was  arrested for a DWI and he resigned from his job. The town learned of the DWI from the Temple, Tex., police department when they called and “said that they had our (China Grove) vehicle because (the police chief) was driving a police vehicle from China Grove. China Grove sent their other policeman up to Temple to get their police car.”

They didn’t have a crazy sheriff with a samurai sword, but they did have a crazy police chief driving a China Grove, Tex., police car when charged with a DWI.

In 2014, Dave Paulson wrote on his Tennessean.com blog that, “There really is a China Grove. It’s basically a nonsensical set of lyrics about a sheriff down in that area, right outside of San Antonio, China Grove is a feed store. But there’s another one in North Carolina, supposedly.”

Paulson reported that country singer Dolly Parton, wearing a green jumpsuit while swinging on a swing, sang the China Grove song on her TV show in 1976.

A few of the comments on social media about the song and the towns are:

“I was born and raised in China Grove, N.C. It was named for a large grove of Chinaberry trees that used to grow in the area long ago. Last time I checked, it was the only place named China Grove in the country that had its own zip code (28023).”

“There is a China Grove, North Carolina.”

theinvaderband, 1 year ago  (a musical band from Winston-Salem):

“Played a wedding there, and yes, we learned China Grove.”

“But every day there’s a new thing coming

The ways of an oriental view

The sheriff and his buddies

With their samurai swords

You can even hear the music at night …