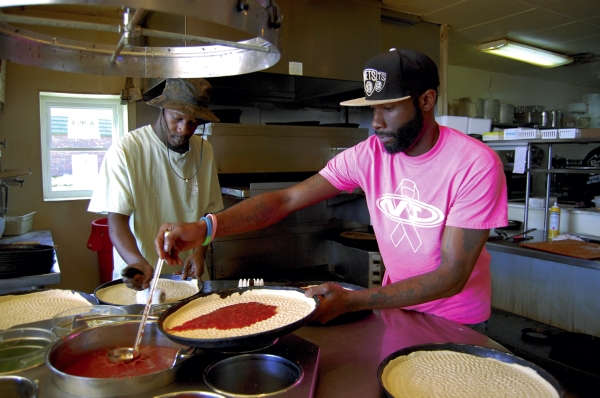 Jeff Huffman is not just the manager of Village Inn Pizza Parlor at 2138 Statesville Blvd. The restaurant is a part of him and running it is what he loves to do.

This is actually Huffman’s second time working for the restaurant. He worked for the restaurant before and saved it from shutting down. After some time, he stopped working there to start another restaurant with his brother, but Huffman said that just wasn’t him.

Six years ago, the restaurant was once again not doing well. It was in danger of closing, and the restaurant owners called him and asked if he would be willing to come back.

“I couldn’t stand the fact that they were going to close this,” Huffman said.

Today, Huffman said they have almost doubled their business and are running out of space.

Village Inn Pizza is closing again, but this time it is for a good reason.

Village Inn Pizza Parlor will be closing on Feb. 15 and 16 for an expansion and renovation.

If the weather and other hiccups do not hold up the progress, Huffman said he hopes to be back open on Wednesday.

The restaurant will be expanding into the space next door. Huffman said the place will be getting a total makeover — new furniture, hardwood floors around the buffet, new carpet and a black paint job for the ceiling.

With the additional space, the restaurant will have seating for 140 people.

He said he is going for an upscale look while keeping the same down-home service.

Huffman said one of the things that brought the restaurant back from nearly closing was his customer service.

Huffman and his wife Star run the restaurant during the day and their two daughters run things in the evening.

Customers are greeted at the door, most of them by name. Huffman said he tries to treat all of his customers like family.

“People just like to be talked to,” he said. “I think that’s the big thing that’s turned (the restaurant) around.”

Huffman said all of his employees get compliments from customers.

Many customers have also commented on how excited they are for the renovations. Huffman said the repairs were long overdue, so he wants everyone to come see the finished product.

“I want everybody to come and see it … If they don’t eat with me, that’s fine. I don’t care. I just want them to see what we’ve done and how far we’ve come,” he said.

The restaurant on Statesville Boulevard has been open since 1987, and Huffman said Salisbury has had a Village Inn Pizza since 1969.

“If anybody wants a friendly, down-home, come-to-the-house-and-eat kind of atmosphere, that’s what we are,” he said.